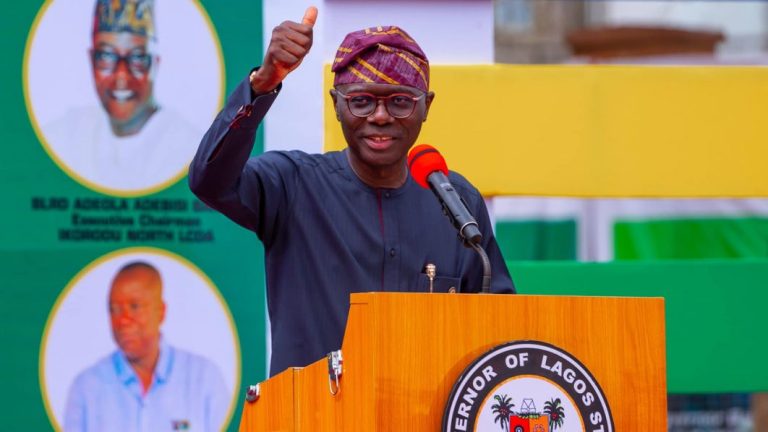 The Governor assured the timber traders of the long awaited planned relocation to the permanent site on Tuesday during his tour of Agbowa-Ikosi Timberville in Ikosi-Ejirin Local Council Development Area (LCDA) to inspect the level of work done on the site.

In a statement, the State Government started the development of the Timberville during the Babatunde Fashola administration. The project was stalled afterwards, creating an atmosphere of uncertainty over the fate of the saw millers in Oko Baba.

Sanwo-Olu revisited the project by re-mobilizing the contractor back on the site. The saw millers could not hold back their excitement at the development; their leader, Alh. Abdul-Ganiu Onikeku joined the Governor on the tour of the site.

The Governor, joined by his deputy, Dr Obafemi Hamzat, and Commissioner for Physical Planning and Urban Development, Dr Idris Salako, also inspected a 1,500 tons per hour brickette plant built on the site by Lagos State Waste Management Authority (LAWMA), which will enable the conversion of mill’s byproduct to combustible brick materials for industrial use.

The State Government, Sanwo-Olu said, revised the approved design of the project to bring more amenities to Timberville for the comfort of the timber traders.

He disclosed that 160 units of two-bedroom flats had been completed for the accommodation of the inhabitants, while blocks of offices for administrative services had been out in place.

He said: “This project has been on for years, but we are happy that our own Government has brought it back. We have invested a lot of resources to be able to bring it to a useable level.

Part of the facilities we have put in place for the potential Oko Baba saw millers that will be moving here is 160 units of two-bedroom flats that have been completed. We also have offices in their various shades that have been built.

The other amenity built on this site is a brickette plant facility which will be managed by LAWMA.

“The leaders of Oko Baba saw millers’ association are excited and are willing to relocate to the site. The ship piles where ships will be berthing have been done. What is left is to clear the trailer path for the saw millers, and put up a police post and a fire service.

“In this regard, we are making additional funding available to the contractor to ensure that before the end of this year, we all should sing Hallelujah and bring everybody down here.

It’s been a very long journey, but our administration is committed to bringing the long wait to an end.”

The Governor explained why there was a delay in the construction of a 3km access road from the main expressway to the site, stressing that the ongoing construction of a bridge crossing on-site slowed down work on the road.

Sanwo-Olu, however, said alternative roads had been completed to pave the way for smooth relocation of the saw millers. He added the access road would be tarred immediately after the crossing bridge is completed.

Once the amenities are in place, Sanwo-Olu said the Government would start relocating the saw millers. He reiterated that his administration possessed the political will to complete the project and move the inhabitants to the site.

The Governor said: “They are waiting on us to clean up and ensure the Timberville is fully habitable for them. In terms of agreement with the saw millers, they have shown their readiness to relocate. We have the full political will to ensure this relocation is done, but we don’t want to throw our citizens into a place that is not fully ready.

“The saw millers at Oko Oba have been cooperative with the Government and working with us tirelessly to ensure everything required is provided. It has been a very long journey, but our administration is committed to bringing the long wait to an end.”

Onikeku, president of Lagos Mainland Sawmillers Association, recalled that the Timberville could have been completed but for the disagreement over the design of the project, which led to it being abandoned.

He said: “All of us are happy this project has been revived by Gov. Sanwo-Olu after many years it was abandoned. One of the reasons we did not agree with the previous Government is that the design was not done according to our agreement. This has been reversed and we have our input in the new design.

“Our people will not be relocated here to be playing ludo game; they are coming to cut timbers and we will make judicious use of the facility. We are expressing our appreciation to the Governor and his deputy for listening to our pleas to revive the project when we met them over the development.”