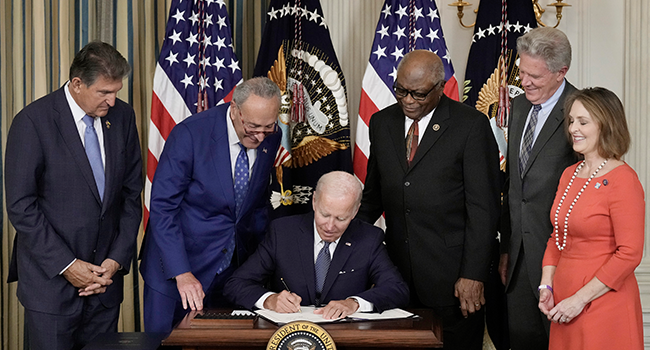 President Joe Biden on Tuesday signed into law a big climate change and health care spending bill, giving Democrats another boost ahead of midterm elections in which Republicans are suddenly less certain of their predicted crushing victory.

The law, dubbed the Inflation Reduction Act, was touted by the White House as the biggest commitment to mitigating climate change in US history, as well as targeting long sought changes in the way medicines are priced, while adding fairness to the tax system, with a minimum 15 percent tax for corporations.

“A nation can be transformed. That’s what’s happening now,” Biden said in a White House speech likely to form the basis of his campaign ahead of the November polls, where Republicans have hoped to end Democrats’ narrow control of Congress.

“It’s about tomorrow,” Biden said. “It’s about delivering progress and prosperity to American families. It’s about showing America and the American people that democracy still works in America.”

While the sprawling bill is a fraction of the gargantuan package Biden originally tried and failed to get through Congress, the fact he was able to sign even the scaled-back version marked a political resurrection — a success Democrats now hope might fuel a comeback at the ballot box later this year.

Under the plan, the government will spend about $370 billion on green energy initiatives while also allowing the state-run Medicare system to negotiate prices for prescription drugs, a popular measure designed to cut the often ruinous prices Americans are forced to pay.

Although the Republican National Committee called a provision to subsidize electric vehicle purchases a “scam,” the Sierra Club, an environmental lobbying group, praised what it called a bold step in the struggle against an overheating planet.

“This day will be remembered by future generations as the turning of the tide against the fossil fuel industry and toward a healthier, cleaner, and more just future for all people across this country,” Sierra Club president Ramon Cruz said.

The law’s massive cost will be covered in large part by closing numerous tax loopholes and enforcing a new 15 percent minimum tax on corporations — a measure Biden has long promised to his base as a way to get the wealthy to “pay part of their fair share.”

Battered by outrage over the chaotic final exit of US troops from Afghanistan, stubborn Covid waves, and the highest inflation in 40 years, the Biden administration has had a rough last 12 months.

Adding to the left’s gloom, opposition from just two center-right Democratic senators has repeatedly doomed party attempts to make use of a razor thin advantage in the Senate.

Opinion polls show Republicans likely to get a healthy majority in the House of Representatives and possibly also win the Senate.

This could effectively turn Biden into a lame duck for the rest of his first term, with Republicans shutting down his legislative agenda and subjecting government officials to aggressive probes by congressional committees.

The last few weeks, however, have seen a momentum shift.

Republicans are embroiled in the scandal over former president Donald Trump’s alleged illegal hoarding of top secret documents at his Florida golf club.

Meanwhile, Biden has scored a series of victories, allowing the White House to project a message that Democrats are focused on helping ordinary people.

In addition to the Inflation Reduction Act, Congress has passed the first meaningful gun safety legislation in three decades, a government-financed plan to rebuild the anemic US microchip industry, and a bill expanding health care for military veterans exposed to toxic smoke.

Coming on top of wins early in his presidency to pour billions of dollars into supporting the pandemic-hit economy and transforming national infrastructure spending, this amounts to a serious legacy, Biden argued.

“I know there are those here today who hold a dark and despairing view of this country. I’m not one of them,” he said.

“That’s the choice we face: we can protect the already powerful or show the courage to build a future where everybody has an even shot. That’s the America I believe in.”