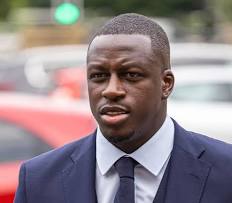 One of the French footballer’s alleged victim is set to give evidence at his rape trial as it restarts today following adjournment.

On Tuesday, jurors heard the video-recorded police interview with the 29-year-old woman but the rest of the court could not hear the evidence properly.

Judge Steven Everett told the jury of eight men and four women he would adjourn proceedings while technicians dealt with the problem.

Earlier in the trial on Monday, prosecutors said the Manchester City left-back Benjamin Mendy and a friend turned the “pursuit of women for sex into a game”, their rape trial has heard.

The role of Mendy’s friend, Louis Saha Matturie, was “to find young women and to create the situations where those young women could be raped and sexually assaulted”, the court was told on the first day of the trial.

Mendy, 28, a French player who was suspended by Manchester City when he was charged a year ago, is accused of eight counts of rape, one count of attempted rape and one count of sexual assault.

Matturie, 40, is accused of eight counts of rape and four of sexual assault.

They both deny all the charges.

The court heard that the pair’s pursuit of “13 women turned them into predators” who were not prepared to take “no” for an answer.

Mendy has played for Manchester City since 2017, when he joined from Monaco for £52m.

He won the World Cup with France in 2018 and the Premier League title with Man City three times between 2018 and 2021.

The offences are alleged to have happened between October 2018 and August 2021.

Mendy was described as a “reasonably famous football player” by Mr Cray, who said because of that “wealth and status, others were prepared to help him to get what he wanted“.

Taking women to Mendy’s mansion was a means of being “able to gain control over their victims“, Mr Cray alleged.

“It was isolated, or so many of the witnesses thought, and once they were there, with the gates locked behind them – they felt vulnerable,” he said.

The defendants “weren’t in some happy state of sexual ignorance” and were aware of what they were doing, he added.

The trial, which is scheduled to last 15 weeks, continues.