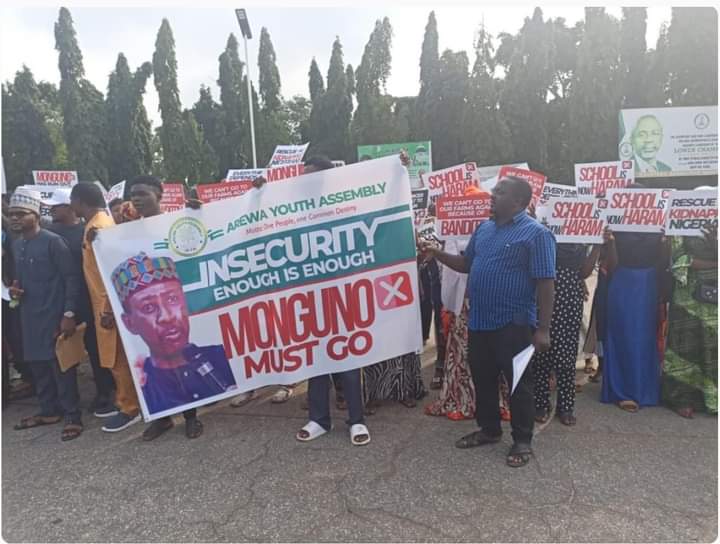 IBADAN, Nigeria (VOICE OF NAIJA)- A group known as the Arewa Youth Assembly (AYA) have protested at the entrance of the National assembly, calling for the resignation of Babagana Monguno, National security adviser (NSA).

Recall that the National assembly is currently on its annual recess.

Speaking with reporters on Wednesday, Aliyu Muhammed, the group’s publicity secretary, said the killing and abductions across the country have increased “astronomically”.

Muhammed said the NSA is either not advising President Muhammadu Buhari properly or his ideas are not effective.

“In response to the astronomic increase in the cases of unprovoked killings and abductions of Nigerians in their farms, houses, trains and our major highways which has led to an unprecedented rise in the poverty rate and food scarcity across the country, we want the immediate removal of the national security adviser,” he said.

“All this is because there is a severe defect in the security architecture of our country. The criminal elements became emboldened under his watch as the NSA, they equally ambushed and killed some officers of the brigade of guard to Mr President and also issued notice to kidnap our sitting president, Buhari and Governor Nasir el-Rufai of Kaduna state.

“This is unfortunate and unimaginable in the history of nationhood. The NSA is either not advising the president or his ideas are ineffective, hence, the seeming triumph of ragtag elements over our armed forces.

“We, therefore, call for his immediate resignation or be sacked by Buhari.”