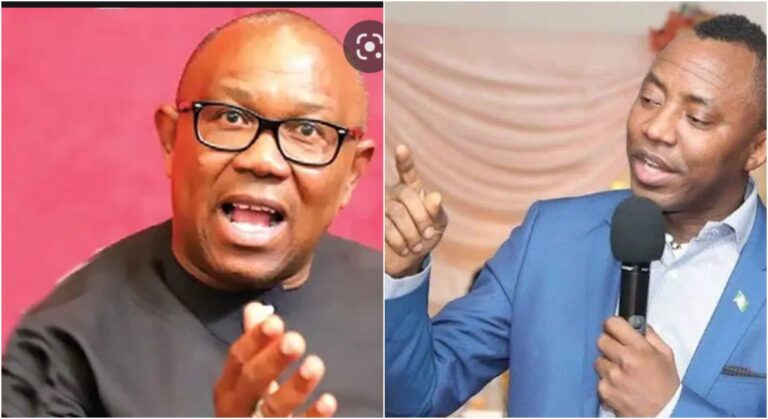 LAGOS, Nigeria (VOICE OF NAIJA)- The Presidential candidate for the African Action Congress party, AAC, Omoyele Sowore has disclosed how former presidential spokesperson Doyin Okupe tried to get his support for the candidate of Labour Party, Peter Obi.

Doyin Okupe is a major anchor and promoter of the 2023 presidential ambition of Obi, a former governor of Anambra State.

But Sowore, who also contested for the presidency in 2019 said Okupe had about a month ago tried to get him to drop his ambition and support Peter Obi in a post on his Facebook page on Tuesday

He said, “About a month ago, Dr. Doyin Okupe called me for a meeting over Peter Obi, I was at the FCIID in Abuja trying to extract a victim of police abuse (one Pastor Kassy of Peniel Tv International Benin City Nigeria) from the unjust detention of the Nigeria Police Force.

“Okupe and I had a back and forth on the perfidy of the political elite, reminding him of his role in the June 12 betrayal as the spokesperson of the NRC.

“To cut through the chase I asked Dr. Okupe to let me know what Obi has to offer, he promised to get back to me, it is almost 2 months after, he hasn’t called back! I was not expecting a call back.

“I knew the drill, he thought I could be used to front load a narrative that they’ve reached out to some hard core leftists to sell the impression to some Nigerians that they’ve mobilized all the ‘mobilisables’, our conversation proved him wrong, too quickly.

“I keep saying this, the mass deception might overwhelm some, but not those of us who’ve fought these forces our entire life. We are different, it takes a lot to remain consistent, duly diligent, fervent and committed in a nation that rewards impunity and dishonesty.”