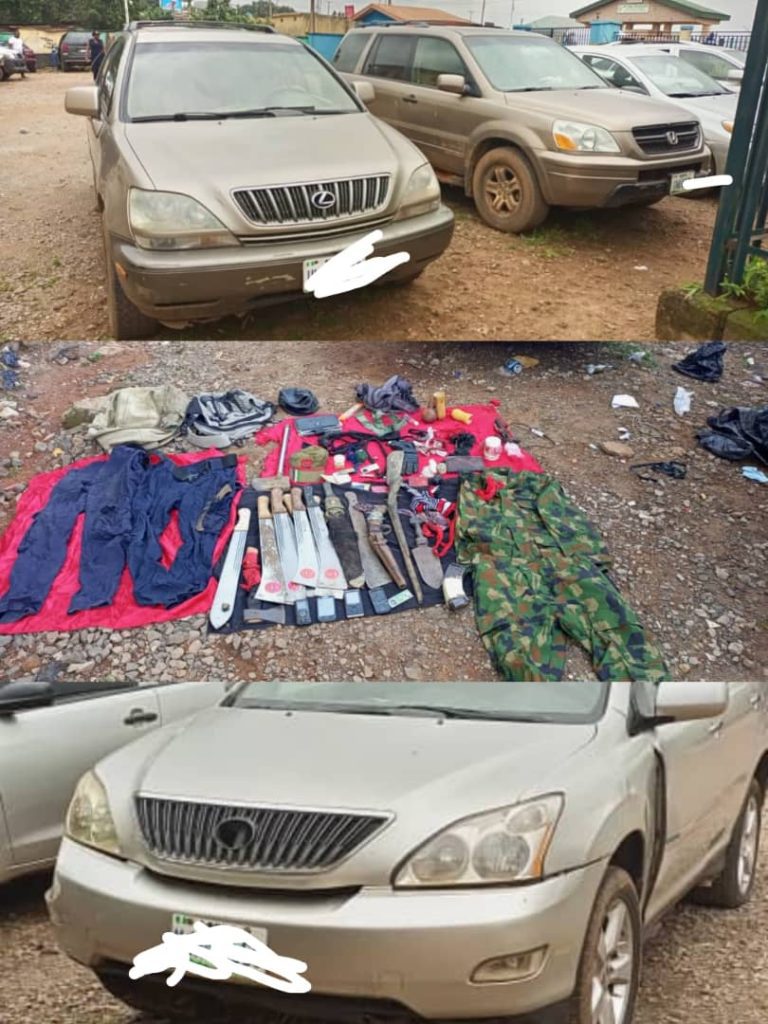 ENUGU, Nigeria (VOICE OF NAIJA)- Enugu State Police Command said its operatives have neutralized one hoodlum suspected to be a member of the Indigenous People of Biafra (IPOB), while several others escaped with varying degrees of fatal gunshot wounds, due to the superior firepower of the Operatives.

This follows a tactical and intelligence-driven dusk to dawn raid of IPOB/ESN camp in a forest at Agu-Ibeje in Enugu-Ezike community of Igbo-Eze North Local Government Area, Enugu State.

During the operation, there was discovery and exhumation from a shallow grave in the camp, the corpse of their male victim identified as Okpanachi Johnson, a Police Officer serving in Igbo-Eze North Police Division of the Command, who had gone missing on 30 July, 2022, with all effort made to trace his whereabouts proving abortive.

This was disclosed in a statement made available to journalists by the DSP Daniel Ndukwe, Police Public Relations Officer, Enugu State Command in Enugu on Tuesday.

According to him, this is in pursuance of the crime fighting strategies devised by the Commissioner of Police, Enugu State Command, CP Abubakar Lawal, fdc, to rid the State of criminals and their activities.

He noted that the operation which was carried out between 11th and 12th August 2022 was successful due to help of the Police Operatives of the Command drawn from Tactical Squads and Operation Restore Peace.

Ndukwe said the hoodlums, on sighting the Operatives, engaged them in a gun duel.

Items recovered at the Camp are the following exhibits: 12 firearms, including one AR-K2 Assault, six Pump Action guns, one locally-made Berretta-like pistol and five locally-fabricated double-barreled guns; 98 live cartridges; two Machetes, one Digger, one Battle axe and one Hacksaw; five motor vehicles, including three Toyota Sienna minivans, one Honda Pilot Jeep and one Hiace (Hummer) bus loaded with assorted Ankara fabrics, all reported to have been snatched from their owners at different times within the area by the hoodlums; 20 different brands of motorcycles with their plate numbers removed; one Police bullet-proof vest; one pair of Police Camouflage uniform; one pair of Military camouflage uniform with a cap and Military singlet.

Others include: one piece of red-black-green coloured clothing identified as Biafra flag and another five pieces of masquerade-like attires of the said flag colours; one HP laptop with its bag; 22 different brands of mobile phones; six different brands of Mp3 players; one Canon camera, six torchlight, three rolls of cello-tapes; one air pumping machine; one small yellow-coloured generating set; 15 fabric armless and five plastic chairs; a set of musical equipment, including band set, piano, guiter and speakers, the hoodlums are alleged to have stolen after invading a church in the area; seven school bags; one camp bed and 21 pieces of table spoons.

Also, in a related development, the Police Operatives, on 8 August,2022 at about 9.15am, recovered two AK-47 rifles with four all loaded with a total of 64 rounds of 7.62mm caliber of live ammunition.

Currently in the custody of 82 Division of the Nigerian Army Enugu, one locally-made cut-to-size gun, one Dane gun, one Lexus RX 330 and one RX 300 Jeeps, one Honda Pilot Jeep, 25 machetes, two axes, one dagger, four phones, a Military camouflage uniform, two Forest uniform trousers and fetish items suspected to be charms.

The recovery is sequel to the operatives swift response to a distress call alleging that IPOB/ESN hoodlums invaded and set ablaze the house of a local vigilante at Oduma community in Aninri Local Government Area on the said date.

Meanwhile, the Commissioner while commending the Operatives for the successful execution of the operations without any casualty recorded by the Command, has charged them to remain focused on actualizing the overall goal of ridding the State of unrepentant criminal elements.

He further calls on residents of the State to remain law-abiding, vigilant and support the Command with credible information and/or intelligence it requires to combat criminals and their activities.

He also enjoins individuals and owners of medical facilities to quickly report anyone sighted with gunshot injuries to the Police.