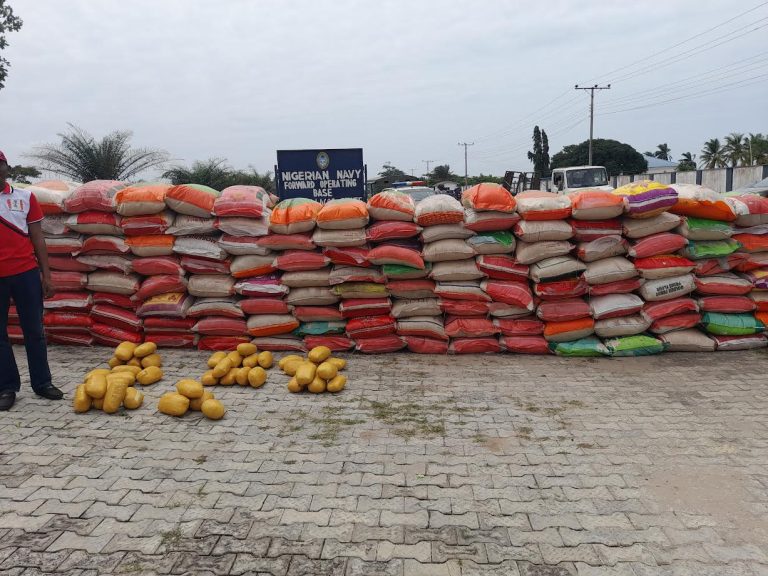 LAGOS, Nigeria (VOICE OF NAIJA)- The Nigerian Navy has seized 351 bags of foreign rice and 40 wraps of cannabis on Badagry/Port Novo waterway and Badagry Beach, respectively.

The illicit items were displayed at the “Handing and taking over” to officials of the Nigerian Customs and the National Drug Law Enforcement Agency (NDLEA) at the Navy Base Badagry last Wednesday.

Speaking to newsmen, the Commanding Officer, Forward Operating Nigerian Navy Base Badagry, Captain James Otache, said while the items were captured, the suspects took to their heels upon sighting the navy patrol ship.

The seizure, according to the commanding officer, is in line with extant regulations and harmonised standard operating procedures.

“It is expedient that the items are handed over to the appropriate prosecuting agencies – Nigerian Customs Service and the NDLEA,” he clarified.

Otashe, however, cautioned perpetrators of the heinous acts and prospective smugglers to desist from it, adding that the Nigerian Navy would not rest on its oars to put an end to these nefarious activities.

While commending the Chief of Naval Staff, Vice Admiral Awwal Gambo for his support for FOB Badagry, the commanding officer promised that the NN would continue to mount aggressive patrols until smuggling of any kind is brought to an end.

In his reaction, the Chief Superintendent, Narcotic, NDLEA, Mr Abdul Maiyaki, echoed the resolve of the new Chairman of the NDLEA not to leave any stone unturned.

“We are busy combing the streets, arresting the barons and making sure they face the wrath of the law,” he emphasised.

Admitting that crime is part of society, Maiyaki assured the public that the NDLEA is doing everything possible to see that it brings this drug menace, trafficking, and abuse to the nearest minimum.

He added: “We have this great synergy which we have been manifesting over time. We appreciate the efforts and the cooperation of the Nigerian Navy and Customs.”

The CSM hinted that the NDLEA is going to deploy its intelligence unit to see that the owners of the drugs are apprehended and face the consequences.

Meanwhile, the Deputy Comptroller in charge of Seme Command, Nigeria Custom, Mr Sunday Enogela, highlighted that since the coming of the Comptroller General of Custom (CGC), “we have been doing everything to ensure that the smuggling of rice, arms, ammunition and others is brought to an end.

“Thanks to the Navy and other agencies. They have been doing a lot to dissuade this crime”.

He, therefore, cautioned culprits that the smuggled rice could have some environmental hazards and be dangerous to the health of Nigerians.

“The smuggled food could be a menace to the agricultural system. It could be poisonous. It is not the interest of the government,” Enogela outlined.