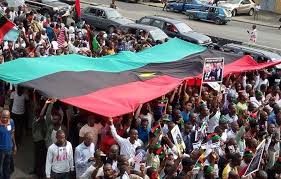 This follows the euphoria of its successful meeting with the government and people of Corsica, during the just concluded e-Ghjurnate Internazionale Conference.

The pro-Biafra group said that it is currently conducting an international information campaign geared towards demanding the release of Mazi Kanu.

A statement by IPoB’s Media and Publicity Secretary, Emma Powerful, titled: “Biafra sovereignty and independence is sacrosanct and reality” said that the Corsica Conference has opened a new vista to its search for international partners, with whom it can join forces together to make its voice heard and its demands given due attention in the international fora.

The statement read: “As a result of the consistent and unwavering push for the restoration of Biafran sovereignty and independence by the peaceful movement and family of the Indigenous People of Biafra, IPOB, under Mazi Nnamdi Kanu, we wish to inform IPOB family worldwide and all Biafran people, friends of Biafra and all lovers of Biafra freedom across the world, that IPoB has, once again, accomplished another precious milestone in our unceasing effort to extricate the land of Biafra from the bondage of British and Nigeria’s hegemony.

“IPOB has placed Biafra for the first time in its history in the minds of the government and people of Corsica during the just concluded e-Ghjurnate Internazionale Conference, which hosted IPoB delegation representing Biafra, a country of about 70 million people currently ruled by Nigeria.

“Indigenous People of Biafra have been fighting for the rebirth of an independent state almost half a century after the proclamation of the Republic of Biafra 1967-1970.

“Mazi Chika Edoziem, IPOB Head of Directorate of State, addressed the emerging nations on behalf of the IPOB movement worldwide. Every Biafran needs to know that one of the major agenda of the IPOB delegation to the E Ghjurnate Internazionale Conference is to secure the support of all the delegates to the Conference for the unconditional release of Mazi Nnamdi Kanu, the leader of the Indigenous People of Biafra.

“The Conference also provided us new genuine friends who have collectively added their voice to the immediate and unconditional release of Mazi Nnamdi Kanu, the leader of the Indigenous People of Biafra worldwide.

“We must match ahead undeterred and dedicated to our cause while expecting both mid-term and long-term positive results from the Corsica Libera Conference.”