Amazon’s Bezos Attends Premiere Of ‘Lord Of The Rings’ Prequel 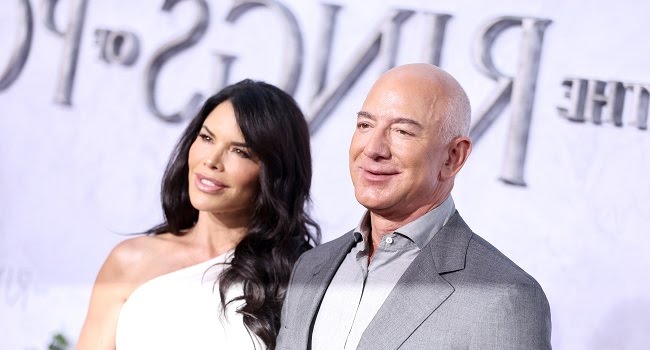 Jeff Bezos, the multi-billionaire founder of Amazon – an online shopping giant-turned-streamer – attended the premiere of ‘Lord of the Rings’ prequel.

It has been dubbed the most expensive show ever made, but producers of Amazon’s “The Lord of the Rings: The Rings of Power” described its $1 billion price tag as a “bargain” at a lavish world premiere in Los Angeles Monday.

The highly anticipated TV series is said to be a personal obsession of Jeff Bezos.

Amazon Original’s forthcoming series, The Lord of the Rings: The Rings of Power takes viewers on the journey of the lesser-known Middle-earth Second Age.

The much-awaited Prime Video series introduces a new storyline, reveals about the Harfoots, and sets sail to the never-before-seen island kingdom of Númenor.

The latest clip that Prime Video dropped shows the Galadriel, played by Morfydd Clark, introducing Númenor, as “the westernmost of all mortal realms.”

Surrounded by the ocean, the island kingdom offers picturesque views with a grand history.

Actress Cynthia Addai-Robinson, who plays Míriel, the queen regent of Númenor, describes it as “a very nautical society at the height of its power.”

Pharazon, a Númenórean advisor, played by actor Trystan Gravelle explains how “half the island wants to cling to the Elvish culture, while the other half wants to go their separate ways.”

Elendil, a Númenórean sailor, played by actor Llyod Owen who foresees the upcoming tragedy feels, “to be able to go back and find new manure at its peak it’s extraordinary, but it’s at a tipping point.”

Set thousands of years before J.R.R Tolkein’s The Lord of the Rings and the Hobbit, the series revolves around major events including the fall of Númenor.

Fresh episodes of The Lord of the Rings: The Rings of Power will be released every week starting September 2, 2022, on Prime Video in English, Hindi, Tamil, Telugu, Malayalam, and Kannada.

Jeff Bezos Lord of the Rings