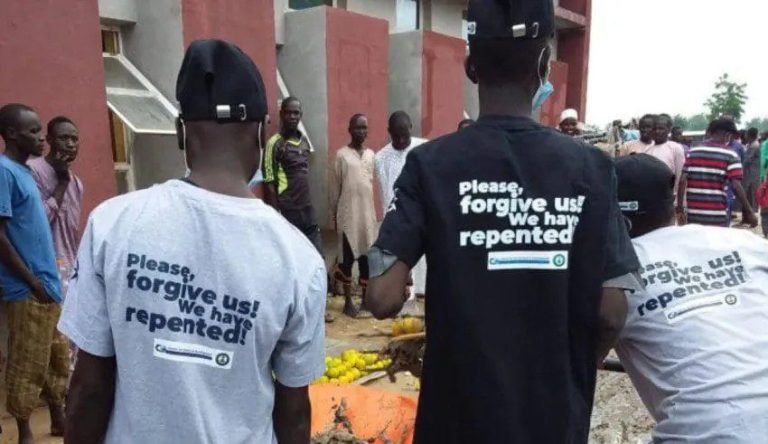 According to the News Agency of Nigeria, the exercise was organised by the Centre for Democracy and Development in collaboration with the Borno State government.

Some of the repentant insurgents wore T-shirts with inscriptions that read ‘Please forgive us’, ‘We have repented’, and ‘Let’s rebuild Borno again’.

In February 2022, Borno State Governor, Babagana Zulum had said that over 90% of repentant Boko Haram and Islamic State West Africa Province (ISWAP) terrorists are being disarmed for reintegration into communities.

The governor’s declaration was the opposite of what Governor Nasir el-Rufai of Kaduna State, said in December last year where he said that he does not believe in rehabilitating terrorists.

The Kaduna state governor, who spoke to State House correspondents after meeting with Predident Muhammadu Buhari had said that the best way to deal with the persons terrorising Nigerians is to kill them.

But the Borno State governor while fielding questions from journalists after the inauguration of the Presidential Committee on the Repatriation, Return, and Resettlement of Internally Displaced Persons (IDPs) in the North-East of Nigeria at the Presidential Villa, said that the Boko Haram terrorists that have surrendered are genuinely repentant.

He said most of the repentant terrorists are already giving the government the necessary support.

Asked if he was confident that the terrorists were truly repentant, he said, ”Hundred percent confident. Yes. While no process is perfect in the entire world, so far, so good, the process has yielded positive results.”