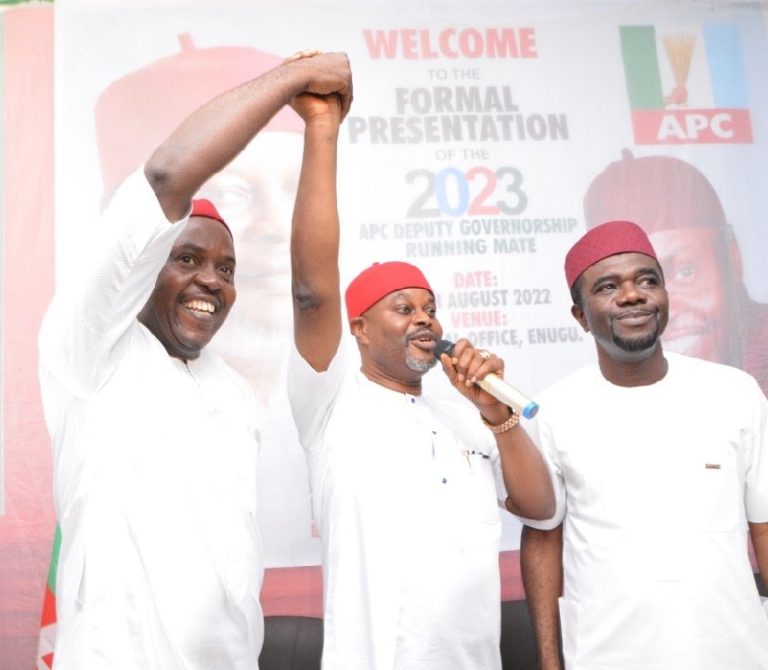 While presenting him at the South-East Secretariat of the APC, Nnaji said it took him time to find a running mate because he was looking for quality.

He noted that the task to find a Deputy was very tormenting, saying that “it wasn’t an easy one because I knew the kind of person I was looking for. I know my quality, so I needed to get someone in the same category.

“I have been able to get a professional in politics as my running mate, Barr. George Ogara.”

Nnaji stated also that the ward tour he undertook was very revealing on the situation of the party, as well as condition of infrastructure in the State.

“The new APC is work in progress. We will keep getting the other ones that are reconcilable, the other ones we will reconcile when we get into Government House,” he added.

In his remarks, Ogara pledged total loyalty to Nnaji and the party.

“I want to say that I will work for this party so that all our interests as politicians are protected.

“I want to assure everyone of my loyalty to our candidate and the party for the next eight years.

“I can perform and I will do this work without complaining and I will render account to you,” he pledged.

Speaking earlier, the State Chairman of the party, Barr. Ugo Agballa declared that the APC was resolute in its move to provide alternative in Enugu State.

According to him, “we have a party that is capable. We won’t allow some people to impose their crony.

“Everybody who loves Enugu State must converge in APC to stop the plan by the cabal. The ruling hegemony must be stopped. The political class in the PDP are opportunists.

“They dominate Enugu politically and economically. I call on the people of Enugu State to rise against this opportunistic cabal, people who have reduced us to beggars.

“It is not a battle for Uche Nnaji alone, it is for the entire people of Enugu State.”