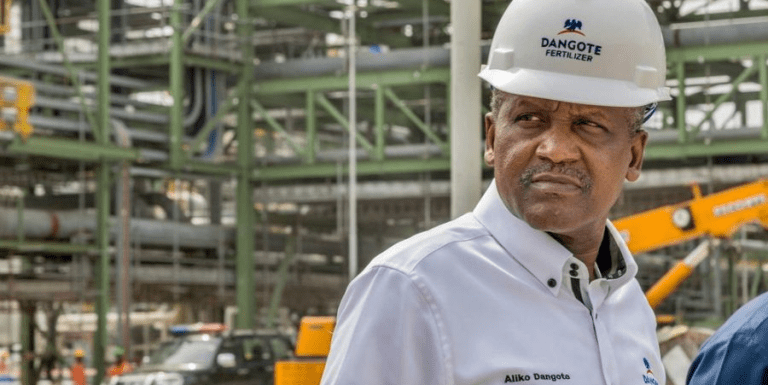 IBADAN, Nigeria (VOICE OF NAIJA) – For the eleventh time in a row, Aliko Dangote has been named the richest man in Africa. He is also the richest black man in the world.

Dangote emerged as the 67th richest person in the world with an estimated net worth of $20.7 billion, as against his previous ranking of 72nd in the world last month, according to Bloomberg’s billionaires’ index.

The business empire he began to build more than three decades ago, Dangote Group, is one of the largest private-sector employers in Nigeria as well as the most valuable conglomerate in West Africa, with a market capitalization of $15.5 billion.

The Dangote Group is the largest private employer in Nigeria.

Dangote has investments in 18 African countries, creating jobs and economic value across the continent in a range of industries.

Born 4 October, 1957 in Kano State, Nigeria, Dangote’s great-grandfather was one of the richest men in West Africa, trading kola and ground nuts.

His grandfather, Sanusi Dantata, was once named one of the wealthiest people living in Kano.

He made his fortune selling commodities like oats and rice.

Dantata became Dangote’s guardian in 1965 after the death of his father.

Dangote’s father, Mohammed, was a businessman associated with Sanusi Dantata who is the father of Mariya Dantata.

He obtained his primary education at the Sheikh Ali Kumasi Madrasa, and then proceeded to Capital High School Kano.

Shortly after graduating from Egypt’s Al-Azhar University in 1978, with a degree in business, Dangote returned to Nigeria.

The aspiring businessman who would later become a mogul, borrowed $3,000 from his uncle to import and sell agricultural commodities in Nigeria.

The funds from the loan allowed him to import soft commodities at wholesale prices from international suppliers.

Two of his main imports were rice from Thailand and sugar from Brazil.

He then sold those items in small quantities to consumers in his village at a lucrative markup.

His business venture quickly became a success, and as a result, he managed to repay the entire loan within three months of starting operations.

In an interview with Forbes, Dangote claims that on his best days, he was realizing a daily net profit of $10,000.

In 1981, he formed the corporation that later became Dangote Group.

Throughout the 1980s and 1990s, Dangote diversified his operation to include trading sugar, flour, fish, rice, milk and iron.

After traveling to Brazil to study manufacturing in 1996, the business tycoon shifted the company’s focus from trading to manufacturing, believing there was an opportunity to create a local operation that would profit from meeting the basic consumer needs of Nigeria’s growing population.

In 1997, Dangote realized that acting as a middleman was a very costly endeavor, so he built a plant to produce what he had been importing and selling for the previous 20 years: pasta, sugar, salt, and flour.

Around the same time, Dangote was awarded a state-owned cement company.

The Kano state indigene significantly expanded the operations of the company in 2005, by constructing a multimillion-dollar manufacturing plant.

The construction was financed with $319 million of Dangote’s own money in addition to a $479 million loan from the International Finance Corporation, a sister organization of The World Bank.

Each of his manufacturing divisions has since been separated into publicly traded companies: Dangote Sugar Refinery PLC., National Salt Company of Nigeria PLC., and Dangote Cement PLC.

A year later, he bought the Benue Cement Co. from the Nigerian government.

Unlike many wealthy Nigerians who made their fortune in oil, Dangote initially chose to go down a different path, but he has since entered the oil and gas industry.

In an effort to put some of his cash reserves to work, Dangote is working on a massive oil refinery in Lagos, which is projected to start operations in late 2021.

If successful, it could significantly reduce Nigeria’s reliance on international suppliers for oil and gas and end the import of $7 billion in fuel a year.

The $15 billion refinery in Nigeria is the largest industrial project ever in Nigeria and is expected to produce 650,000 barrels of oil per day.

As a leading global philanthropist, Aliko Dangote set up the largest Foundation in Africa with an endowment of $1.25 billion.

Since its incorporation in 1994, the Aliko Dangote Foundation has worked hard to enhance opportunities for social change through strategic investments that improve health and wellbeing, promote quality education, and broaden economic empowerment opportunities.

The Foundation is a leading contributor to the ‘Saving One Million Lives’ every year in Nigeria initiative.

The Dangote Foundation was at the vanguard of containing the spread of Ebola in Nigeria and other parts of Africa.

The Foundation was the biggest private contributor to the African Union Ebola Trust Fund with a donation of $3 million.

Even though he is the richest man in Africa, not much is known about his personal life.

It must be noted that the 64-year-old industrialist lives in Lagos, Nigeria, and has been married twice.

He has three daughters; Halima, Mariya, and Fatimah and one adopted son Abdulrahman Fasasi.

Aliko Dangote’s journey to fortune is not a rags-to-riches story.

He came from a wealthy family that was able to provide the financial assistance he needed to start his business.

Over the years, Dangote has expanded into new business segments, including telecommunications, real estate, and steel manufacturing.

Today, his holding company, Dangote Group, is the largest conglomerate in West Africa.

His title as “richest man in Africa” seems to be one he’ll hold for years to come.