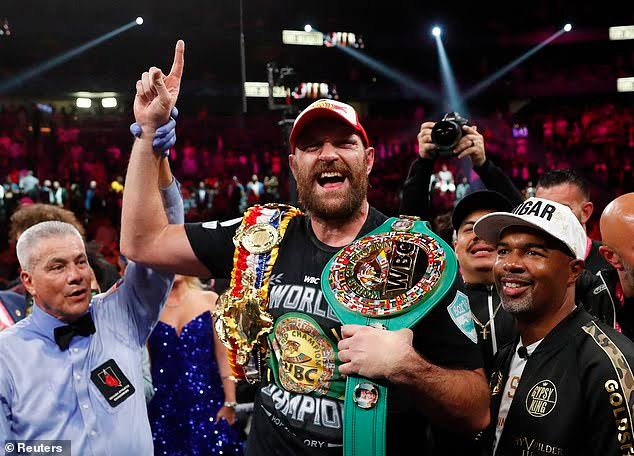 IBADAN, Nigeria (VOICE OF NAIJA)- British boxing champion, Tyson Fury has revealed his intention to retire from boxing on his 34th birthday on Friday.

The WBC heavyweight champion made the announcement having previously performed a number of U-turns over his future in the sport.

“After long hard conversations, I’ve finally decided to walk away & on my 34th birthday I say Bon voyage,” Fury posted on Twitter.

Nicknamed ‘The Gypsy King’, Tyson Fury is a successful boxer, a happy family man, and a respected athlete of the sports community.

As heavyweight division is always treacherous, keeping the top-spot isn’t a walk in the park.

However, Tyson Fury has walked across the division without being defeated till now.

He went on an undefeated run of 27 fights before facing the maiden and only draw of his career against Deontay Wilder in 2018.

However, he returned to the winning column in style, secured a rematch, and shook the world.

Fury has bagged all the heavyweight straps of boxing in his career.

In a super fight against the legendary Wladimir Klitschko, ‘The Gypsy King’ claimed a sensational win and became the WBA, WBO, IBF, and IBO, Ring, and the Lineal heavyweight champion of the world.

Later in 2020, Tyson Fury became the WBC heavyweight champion by defeating Deontay Wilder. So, it’s safe to state that he has done it all in the roster.

Before getting his hands on the world championships, Fury has claimed several more belts.

In 2009, ‘The Gypsy King’ grabbed the first title of his pro career by beating Josh McDermott for the BBofC English heavyweight belt. He won again against McDermott in a rematch a year later.

It was followed by another TKO win against Martin Rogan for the vacant BUI Ireland heavyweight title in 2012.

So, the Brit tasted championships even before he became the world titleholder.