I Didn’t File Any Suit Against Atiku, It’s All False – Wike Insists 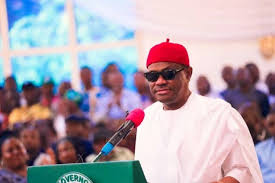 ENUGU, Nigeria (VOICE OF NAIJA)- Governor Nyesom Wike of Rivers State has distanced himself from a suit seeking the disqualification of the presidential candidate of the Peoples Democratic Party (PDP), Atiku Abubakar

Supporters of Wike had taken Atiku, Governor Aminu Tambuwal of Sokoto State and the Independent National Electoral Commission (INEC) to court over the conduct of the presidential primary election of the party in May.

Newgent Ekamon and other plaintiffs in a suit marked FHC/ABJ/CS/782/2022, asked a federal high court in Abuja to order INEC to remove Atiku from “its list of candidates in the 2023 presidential election”.

The plaintiffs asked the court to direct “the first respondent (PDP) to declare the second applicant (Wike), a presidential aspirant in the 28 May and 29 May primary as the winner of the aforesaid primary with a corresponding order directing the first respondent (PDP) to forward his name as the candidate to contest the presidential election in 2023”.

Wike lost the PDP presidential ticket to Atiku after Tambuwal stepped down for the former vice-president and asked his supporters to vote for him.

The outcome of the primary election caused division within the PDP.

Speaking in an interview with THISDAY on Friday, Wike denied authorising anyone to file a suit on his behalf.

He said, “I don’t know anything about the so-called suit. I did not ask anyone to file any suit for me.

“I don’t know the lawyers. Am I a kid to be filing a suit at this time? I had 14 days after the primary within which to have filed any suit. I didn’t do that then, is it two months after primary I will file a suit?

“Just yesterday they came up with the claim that I ordered my chief security officer to pull down the PDP flag in government house. This is all false, it’s all propaganda. Some people are trying to use me to win the election. Please disregard all these lies.”