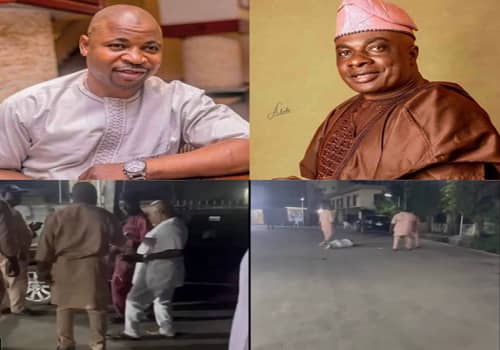 The actor who was overjoyed could be seen rolling on the floor in a video shared by MC Oluomo’s son, King Westt.

According to the inscription on the video shared by Westt, Olaiya was being rewarded for his loyalty.

“My dad surprised actor Olaiya with a new Benz. It’s actually good to be good.”

Olaiya Igwe started his acting career as a TV personality at the Nigeria Television Authority (NTA), where he acted in a stage play with Musbau Shodimu Theatre Organization in the 1970s.

He performed well on stage plays, through his brilliant performances, he was able to advance into acting home videos.

Since then, the veteran actor has featured in over one hundred Nollywood movies, making him one of the industry’s top actors.

He has starred in several movies such as; Ololade (Mr Money), Irun Esin, Oga Olopa, Abela Pupa, Aye Olorogun and many others.