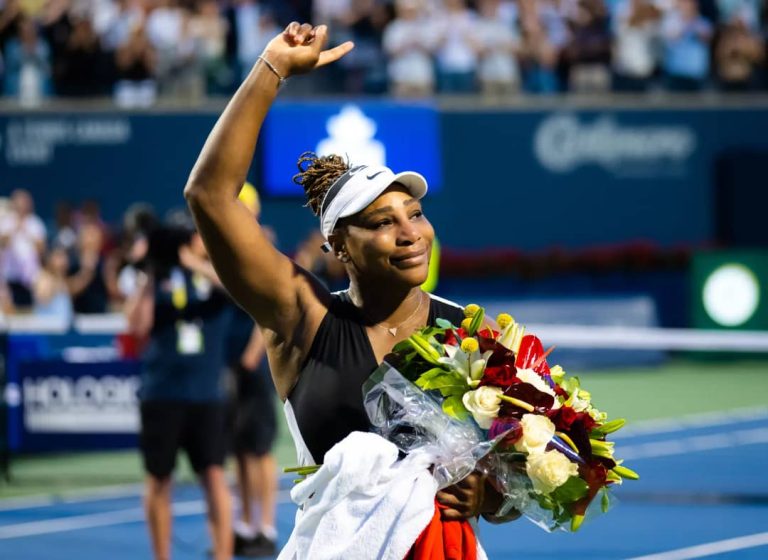 IBADAN, Nigeria (VOICE OF NAIJA) – Switzerland’s Belinda Bencic, on Wednesday, advanced to the round of 16 after claiming her second career victory over Serena Williams at the WTA Toronto Masters.

She was an 18-year-old on the rise when she stunned the American in the semi-finals at Toronto seven years ago.

“It definitely felt very special to be able to be on court with her today again,” Bencic said.

“I never imagined ever playing against her — and beating her twice now in Toronto.”

Wednesday’s victory, however, was bittersweet.

“Today is a little bit more sad in a way,” Bencic said. “I don’t really want her to retire.”

According to Bencic, Williams may be in the home stretch of her career, but the 23-time Grand Slam champion’s aura remains despite the defeat on Wednesday.

“You can feel her presence everywhere. She has that aura …whether you like it or not you are intimidated, you are scared.

“I’m star-struck every time I see her, it’s so difficult to play her,” Bencic said.

Williams, who turns 41 next month, had beaten Spain’s Nuria Parrizas Diaz on Monday for her first singles victory since the 2021 French Open, 14 months ago.

Bencic eased through several long games to twice break Williams in the opening set and survive a harrowing final game to earn the early advantage—striking 14 winners to just six unforced errors to start.

The understandably pro-Williams crowd at the National Bank Open in Toronto, attempted to lift their three-time champion early in the second set as she put together a trio of strong service holds, but Bencic responded each time and was first to break point with a strong forehand into the open court.

Though the Swiss missed an easy backhand into the net, Williams couldn’t capitalize and threw in an ill-timed double fault to put the former world No. 4 in striking distance of victory.

Serving to stay in the match, Serena put down a vintage hold on the brink of defeat but Bencic was again unmoved, converting the first of two match points with a service winner to clear the finish line and win her 30th match of the season in under 80 minutes.

Bencic pulled Williams in for a hug at the net and immediately ceded the floor to the vaunted champion in her post-match interview.

“Tonight is about her,” she said as cheers erupted from the crowd.

In a heartwarming farewell ceremony, Williams was handed flowers and a series of Toronto sports jerseys—both for herself and daughter Olympia, who was in the stands watching mom play this week.