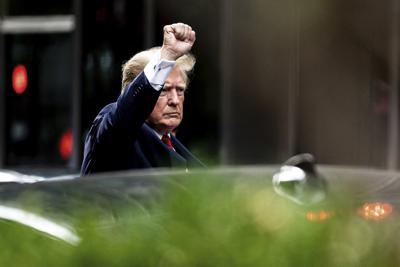 Donald Trump is being questioned under oath Wednesday in the New York attorney general’s long-running civil investigation into his business dealings as a flurry of legal activity surrounds the former president.

Trump’s testimony comes just days after FBI agents searched his Mar-a-Lago estate in Florida as part of an unrelated federal probe into whether he took classified records when he left the White House.

He arrived at the New York attorney general’s office shortly before 9 a.m. in a multivehicle motorcade. As he left Trump Tower in New York City for the short ride downtown, he waved to reporters assembled outside but did not comment.

“My great company, and myself, are being attacked from all sides,” Trump wrote beforehand on Truth Social, the social media platform he founded. “Banana Republic!”

Messages seeking comment were left with James’ office and with Trump’s lawyer.

Trump’s testimony is happening at a critical point in James’ investigation: In May, James’ office said that it was nearing the end of its probe and that investigators had amassed substantial evidence that could support legal action against Trump, his company or both.

Donald Trump says he invoked the Fifth Amendment and wouldn’t answer questions under oath in the long-running New York civil investigation into his business dealings.

Trump arrived at New York Attorney General Letitia James’ offices Wednesday morning, but sent out a statement more than an hour later saying he declined to answer the questions under the rights and privileges afforded to every citizen under the United States Constitution.”

Anything he said during the deposition could have been used against him in a criminal case. While James’ investigation is civil in nature, the Manhattan district attorney is running a parallel criminal probe.