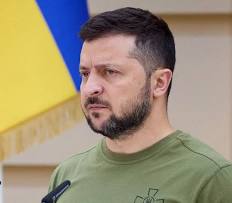 Ukrainian President Volodymyr Zelensky has called on Western countries to ban all Russian visitors – and the Kremlin has responded with scorn.

Russians should “live in their own world until they change their philosophy”, Mr Zelensky told The Washington Post.

Such a ban, he argued, would be more effective than the current sanctions, which bar Russian airlines and officials linked to the Kremlin.

Mr Zelensky’s call may get only limited support, as Russia – despite sanctions – has extensive global business ties and Russian tourists are still welcome in holiday destinations such as Egypt, Turkey and the United Arab Emirates.

And on Monday their Nordic neighbour Finland also backed restrictions on Russian visitors.

Finnish Prime Minister Sanna Marin told national broadcaster YLE “it’s not right that at the same time as Russia is waging an aggressive, brutal war of aggression in Europe, Russians can live a normal life, travel in Europe, be tourists”.

Estonia and Finland are expected to raise the visa issue at an EU foreign ministers’ meeting soon.

“Any attempt to isolate Russians or Russia is a process that has no prospects,” he said.

Russia’s 24 February invasion of Ukraine triggered far-reaching Western sanctions and prompted tens of thousands of Russians to go abroad. They include opposition activists, but also many who are politically disengaged and see better opportunities outside Russia.

Mr Zelensky said, “the most important sanctions are to close the borders – because the Russians are taking away someone else’s land”.

He has previously condemned the Western failure to ban all imports of Russian gas and oil – a trade which helps to fuel Mr Putin’s Ukraine campaign.