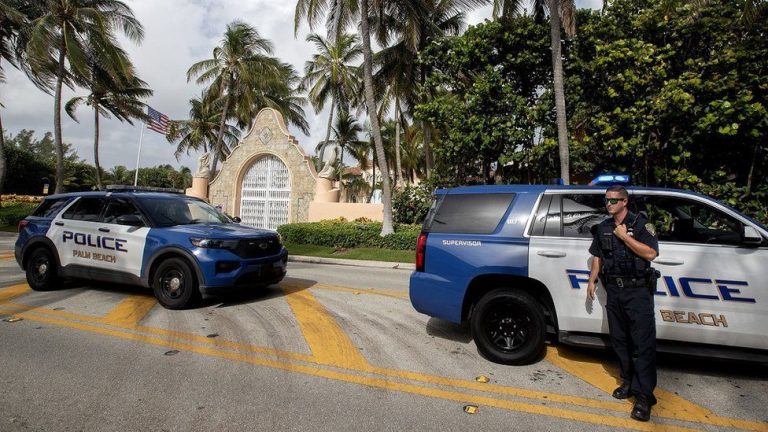 Donald Trump has said his Florida home was raided by the FBI, in a dramatic escalation of the legal investigations into the former US president.

In a lengthy statement on Monday evening, Mr Trump said a “large group” of FBI agents were at Mar-a-Lago in Palm Beach and had broken open a safe.

The search is reportedly linked to an investigation into his handling of classified and sensitive material.

The FBI and the Department of Justice have not yet commented.

An unnamed law enforcement official told CBS News, the BBC’s US partner, that the Secret Service was notified shortly before the warrant was served at about 10:00 local time (14:00 GMT) and that agents protecting Mr Trump helped the FBI investigators.

Several boxes were taken away, the source said, adding that no doors were kicked down and the search had concluded by late afternoon.

Some reports suggest the FBI activity – which Mr Trump described as an “unannounced raid” – was connected to an investigation into whether the former president removed classified records and sensitive material from the White House and took them to Mar-a-Lago.

Eric Trump, the president’s second-oldest son, told Fox News that it was related to an investigation into the handling of National Archives (NA) records that were taken to the Florida residence after his father left office.

US Presidents are required by the Presidential Records Act (PRA) to transfer all of their documents and emails to the NA.

The government agency said in February that it had retrieved 15 boxes of papers from Mar-a-Lago, which Mr Trump should have turned over when he left the White House. It later told Congress the boxes included items marked as classified national security information and asked the Justice Department to investigate.

Mr Trump at the time rejected reports that he had mishandled official records as “fake news”.

A federal search warrant must be signed by a judge and legal experts suggest this warrant was probably approved at the top levels of the Justice Department.

Although such a warrant does not suggest that criminal charges are expected, law enforcement agencies must first demonstrate the possibility that evidence of illegality will be found.

The FBI and the Justice Department rarely comment on active investigations and neither has issued a statement.

The search marks a major escalation in the months-long investigation into the handling of classified documents and comes as Mr Trump – who was in New York at the time – prepares for a possible further presidential run in 2024.

In his statement, he said he had co-operated with all relevant government agencies and so the “unannounced raid on my home was not necessary or appropriate”.

“Such an assault could only take place in broken, Third-World countries,” he said. “Sadly, America has now become one of those countries, corrupt at a level not seen before.”

News of the search has mobilised some of Donald Trump’s supporters. A group gathered outside Mar-a-Lago to wave flags and express their anger while others have travelled to Trump Tower in New York.

Meanwhile, in Congress, many Republicans expressed their anger. House of Representatives Republican minority leader Kevin McCarthy said: “The Department of Justice has reached an intolerable state of weaponised politicisation.”

A senior White House official told CBS that President Joe Biden’s administration was given no notice of the FBI search in Florida on Monday. The White House has said it is limiting its interactions with Justice Department officials to avoid any hint of political pressure or impropriety.