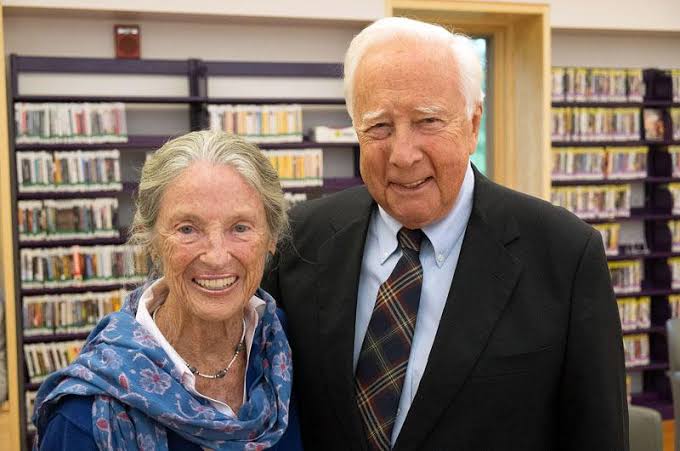 LAGOS, Nigeria (VOICE OF NAIJA)- Pulitzer Prize-winning author David McCullough has died less than two months after his beloved wife, Rosalee. He was 89.

He died on Sunday in Hingham, Massachusetts, according to his publisher, Simon & Schuster

In a statement released by Simon & Schuster CEO, Jonathan Karp, “David McCullough was a national treasure. His books brought history to life for millions of readers. Through his biographies, he dramatically illustrated the most ennobling parts of the American character.”

His fascination with architecture and construction inspired his early works on the Panama Canal and the Brooklyn Bridge, while his admiration for leaders whom he believed were good men drew him to Adams and Truman.

In his 70s and 80s, he indulged his affection for Paris with the 2011 release ‘The Greater Journey‘ and for aviation with a best-seller on the Wright Brothers that came out in 2015.

Beyond his books, the handsome, white-haired McCullough may have had the most recognizable presence of any historian, his fatherly baritone known to fans of PBS’s ‘The American Experience‘ and Ken Burns´ epic ‘Civil War’ documentary. ‘Hamilton‘ author Ron Chernow once called McCullough ‘both the name and the voice of American history.’

McCullough’s specific contribution has been to treat large-scale historical biography as yet another genre of spectatorial appreciation, an exercise in character recognition, a reliable source of edification and pleasant uplift,’ Sean Wilentz wrote in The New Republic in 2001.

Interviewed that same year by The Associated Press, McCullough responded to criticism that he was too soft by saying that ‘some people not only want their leaders to have feet of clay, but to be all clay.’

McCullough received the National Book Award for ‘⁰,’ about the building of the Panama Canal; and for ‘Mornings on Horseback,’ a biography of Theodore Roosevelt; and Pulitzers for ‘Truman,’ in 1992, and for ‘John Adams’ in 2002.

‘The Great Bridge,’ a lengthy exploration of the Brooklyn Bridge´s construction, was ranked No. 48 on the Modern Library´s list of the best 100 nonfiction works of the 20th century and is still widely regarded as the definitive text of the great 19th century project.

Upon his 80th birthday, his native Pittsburgh renamed the 16th Street Bridge the ‘David McCullough Bridge.’

McCullough also was a favorite in Washington, D.C. He addressed a joint session of Congress in 1989 and, in 2006, received a Presidential Medal of Freedom. Politicians frequently claimed to have read his books, especially his biographies of Truman and Adams.

Barack Obama included McCullough among a gathering of scholars who met at the White House soon after he was elected.

The historian was non-partisan for much of his life, but spoke out against Donald Trump in 2016.