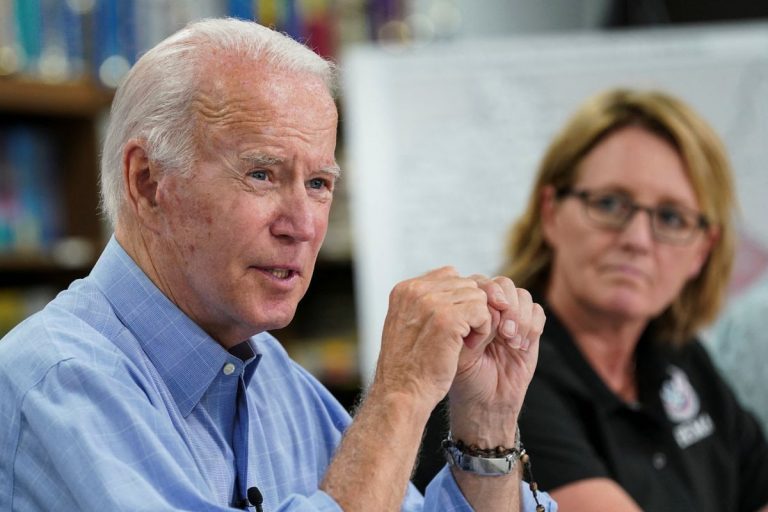 ‘Those are pieces of everybody’s houses. That’s all that’s left,’ Democratic Governor Andy Beshear told the president as they stood in front of school bus.

The president’s motorcade drove along Lost Creek, whose banks are strewn with flood detritus including guilding materials, clothing, and a plastic laundry basket high in a tree.

At least 37 people have died and two remain missing after July’s massive storm dropped 8 to 10 1/2 inches of rain in only 48 hours.

Many have been displaced from their homes while others have been stranded without water, electricity or other critical supplies.

There could be more damage to come. The National Weather Service said Sunday that flooding remains a threat, warning of more thunderstorms through Thursday.

The president called the damage to Kentucky ‘incredibly heartbreaking’ and said the federal government was committed to help, paying ‘100 percent of the costs for the next few months.’

‘People don’t realize those piles of heavy debris, it takes a lot of time, a lot of money to take it away,’ Biden said.

During his stop at Marie Roberts-Caney Elementary school, he received a briefing and joined Jill Biden in the school gym, where she was helping volunteers sort and fold donated clothing.

Biden fist bumped some volunteers, shook hands with others and chatted with many.

During the formal briefing, he talked about flying over the area.

He also pointed out that when a state needs help, members of both parties work together to make that happen, singling out his work with Senate Republican Leader Mitch McConnell of Kentucky to help the state.

McConnell and Biden have sparred repeatedly over the president’s legislative agenda, but Biden noted they came together during the state’s time of need.

‘When there’s trouble everybody jumps in,‘ he said. ‘Mitch McConnell and I – we have battle all the time on issues but, lucky when it comes to these issues, it’s all one team.’

‘It’s my second visit to Kentucky for a crisis. Now what I said holds true today, gonna take awhile to get through this. I promise you we’re not leaving,’ he said.

‘We’ve suffered a consequence of climate change – a significant number of weather catastrophes around the nation. This the the year and a half I’ve been President, I’ve flown over 1000s of acres of fire. The forest is burning. More forest burned down and in the West and the entire state of New Jersey, New York all the way down,’ he said.