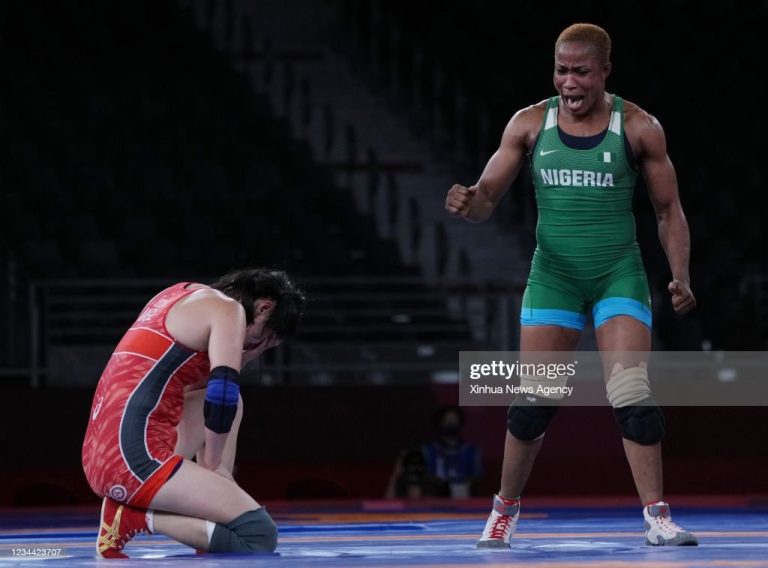 IBADAN, Nigeria (VOICE OF NAIJA) – Team Nigeria won 12 gold medals at the Commonwealth Games in Birmingham; the country’s best medal returns at the event since inception.

And the most interesting part of this information, is that of the 35 medals won by Nigeria to place 7th on the table, all gold medals were won by women.

Voiceofnaija.ng’s Feyisayo Helen took time to look at these women who have brought glory to Nigeria, and share a bit of information about them with Nigerians and those who may not know so much about them.

Born on 20 September 1997, Genesis is a Nigerian freestyle wrestler.

She won the gold medal in the women’s 50 kg event at the 2022 Commonwealth Games held in Birmingham, England.

At the 2016 Summer Olympics in Rio de Janeiro, Brazil, she competed in the Women’s freestyle -48 kg.

Despite the setback she faced in February 2021 where she was stripped of her medal due to anti-doping rule violations, she bounced back to emerge victorious at the Commonwealth Games.

The Nigerian freestyle wrestler who won the gold medal in the women’s 68 kg event at the just concluded Games, is currently ranked as the world number two female wrestler and also the first wrestler to win an Olympic medal representing Nigeria at the Olympics.

Blessing was invited to a national camp in 2007 to take part at the African Games after coaches noticed her impressive performances at school inter-house wrestling competitions.

Her parents were initially against her ambition to become a sport wrestler and advised her that wrestling is allocated only for boys.

The 33-year-old who has since defied the odds, has won a gold medal at the African Wrestling Championships every year for the last 11 years, except for 2012 when she did not enter due to her participation at the 2012 Summer Olympics.

The Ondo State indigene followed that up with a silver win at the women’s freestyle 55 kilograms 2017 World Wrestling Championships.

She participated in Nigeria’s 15th National Sport Festival held in Ogun State, where she won the gold medal in the cadet category.

In March 2019, Adekuoroye was ranked 4th in the Women’s 57 kg wrestling class by United World Wrestling.

She won the silver medal in the women’s 55 kg event at the 2021 World Weightlifting Championships held in Tashkent, Uzbekistan.

The 23-year-old represented Nigeria at the 2019 African Games which is also her maiden African Games appearance and claimed three medals including two gold medals in women’s 55 kg weightlifting event.

She claimed gold medals in women’s 55 kg and 55 kg clean jerk events along with a silver in 55 kg snatch event.

The young lady also emerged as the gold medalist in the overall women’s 55 kg event.

On 26 August 2019, Adijat also set a new African record in weightlifting in the clean and jerk category by lifting 116 kg during the 2019 African Games.

Another Nigerian weightlifter who made Nigeria proud as she triumphed with a new Games record of 206kg from her snatch and clean and jerk lifts at the 2022 Games.

Rafiatu already conquered the African continent by picking 59kg gold at the 2019 African Games and the 2021 African Weightlifting Championships.

The 25-year-old was a gold medalist at the 2021 Commonwealth Championship in Tashkent, Uzbekistan.

She admitted her Commonwealth record was unexpected on the way to winning Nigeria’s third gold in Birmingham.

Folashade broke her own World Record (WR), to win gold for Team Nigeria in the women’s Heavyweight Powerlifting event.

The Paralympic champion lifted a new WR of 155kg to clinch the gold medal, which was surprisingly her first gold medal at the 2022 Commonwealth Games.

She began powerlifting in 1999 in Plateau State, Nigeria.

In 2012, she made her international debut by winning a silver medal in the women’s 75kg category at the 2012 Summer Paralympics, breaking the world record in the process.

The 37-year-old also won gold medal at the 2017 World Para Powerlifting Championships in Mexico. However, she was suspended a year later for breaking anti-doping laws.

In 2021, she won the gold medal in her event at the 2021 World Para Powerlifting Championships held in Tbilisi, Georgia.

This relentless athlete is married to a male Paralympic, Tolulope and they are blessed with a child.

The physically challenged athlete competed in the 2008 Summer Paralympics in Beijing, China where she won a gold medal in both the women’s shotput F57/F58 and the women’s discus throw F57/F58 events.

At the Beijing Paralympics, Eucharia set the world and Paralympic record for the F58 class in shot put and discus.

It was Nigeria’s eighth gold medal at the 2022 CWG. She had formerly won a bronze medal at Tokyo Olympic games.

Chioma made history in Birmingham as the first Nigerian woman to win the Commonwealth Games gold in the Discus Throw event.

Statistics shows that since she started representing Nigeria in 2016, she has now won 5 medals, having claimed the prestigious prizes in Durban 2016, Asaba 2018, Rabat 2019, Mauritius 2022 and now Birmingham.

There aren’t many times one gets to see an athlete break a World Record (WR) on her first attempt in a field event, competing in front of a sold-out stadium at a major championship like the Commonwealth Games, unless you are maybe Goodness Nwachukwu.

The Nigerian Para-athlete, broke not just one, but two WRs in quick succession to dominate her event at the 2022 Commonwealth Games in Birmingham.

Nwachukwu clinched the gold medal for Nigeria in women’s Discus F42-44/61-64 event, putting down a commanding performance that set her apart from the rest of the field.

Before the Commonwealth Games, she held the F42 world record with the best mark of 33.35m, but she improved on that distance with her first throw of 34.84m, which she further improved upon with a throw of 36.56m.

Tobi is a Nigerian track and field athlete who specializes in the 100 metres hurdles and also competes as a sprinter.

Tobi, as she is fondly called, is the last child of three siblings.

From an early age, the young lady was an accomplished athlete. She was a silver medalist at the 2013 African Youth Championships in Warri.

She also claimed gold in the 100 metres hurdles at the 2015 African Junior Athletics Championships in Addis Ababa.

In 2015, while making her All-Africa Games debut as an eighteen-year-old, she won the gold medal in the 100 metres hurdles and in 2016, as a freshman for The University of Texas at El Paso (UTEP), she became the second athlete for the university to be named C-USA Female Track athlete of the Year since UTEP joined C-USA.

The Ogun state indigene has been in the spotlight since she won herself a gold medal with an outstanding performance that clocked 12.68s at the 100m women hurdles finals in the 2018 Commonwealth Games.

The then 21-year-old Nigerian hurdler has recently updated her records. After hitting 12.12s and 12.06s respectively in the semis and the finals of the women’s 100m hurdles at Eugene Oregon’s 2022 world championships that wrapped up a few weeks ago, the Nigerian became a world sensation.

The 25-year-old ran a Games record of 12.30s to defend her Commonwealth title and set other records in Birmingham.

She also powered Nigeria’s 4x100m women’s team to gold at the Alexander Stadium in Birmingham, as Nigeria claimed a first-ever Commonwealth Games title in the event.

Favour is a Nigerian track and field athlete who specializes in 200 and 400 metres.

She is a native of Onicha-Ugbo, Delta State.

The 19-year-old better known as ‘Track Queen’ graduated from Louisiana State University and won the African Youth Championship in 2019.

Ofili was adjudged the female athlete of the meet at the 2019 African under 18 and 20 Championship in athletes because she won the 200 and 400 metres sprints.

Favour Ofili was among the quartet that won 4x100m relay gold at the Commonwealth Games in Birmingham, breaking the African Record.

She also claimed the silver medal in the women’s 200m at the same competition.

Rosemary is a Nigerian sprinter. She is one of the Nigerian quartets who ran a race of their lives to emerge winners in the 4x100m women’s relay event of the Commonwealth Games on Sunday with a time of 42.10s thereby setting an African Record.

She gained her first international experience at the 2018 Commonwealth Games in Gold Coast, Australia where she won a bronze medal behind the teams from England and Jamaica, and followed that up with a gold medal in the 4 x 100 metres relay at the 2019 African Games.

The Ebonyi indigene was part of Nigeria’s 4×100 women’s team that won gold at the African Senior Athletics Championship in Asaba this year.

Grace is a Nigerian sprinter, a multiple national champion in the 100 metres event.

In 2021, she recorded a new personal best time of 11.09s in the 100m to become the first Nigerian athlete to qualify for the delayed 2020 Tokyo Olympics.

The 21-year-old came sixth in the final of the NCAA championship in both the 100 metres and the 200 metres. She also won the Nigerian National Championships over 100 metres.

She’s one of the women who set the African record at the recently concluded Commonwealth Games in the 4x100m relay event.