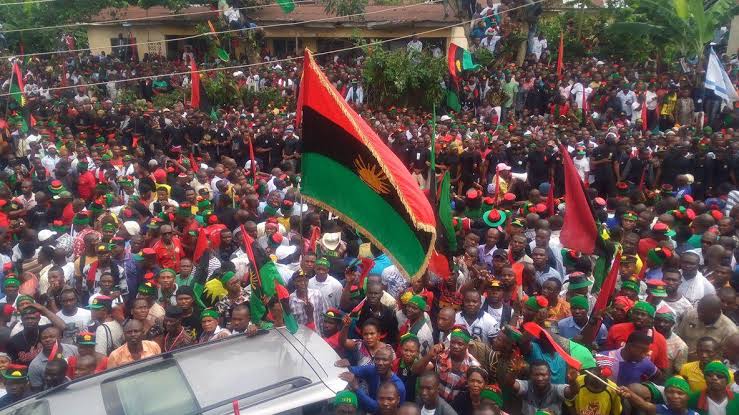 Enugu, Nigeria (VOICE OF NAIJA)- The Indigenous People of Biafra (IPOB) group led by Nnamdi Kanu has disassociated itself from the purported Biafra in Exile Government allegedly set up by a former deputy of the group and other expelled members.

The group said that the expelled members had earlier suggested such government but was not accepted by their leader, Mazi Nnamdi Kanu.

IPOB in a statement by its spokesperson, Emma Powerful on Sunday, denied the claim, insisting that IPOB is still fighting for its struggle legitimately .

The group urged people to disregad the speculation.

The statement read, “IPOB has legitimate and well established Institutions and well-structured administrative hierarchy that oversees the day- to-day running of Biafra affairs.

“Already, all Diplomatic Missions and countries of the world know about Biafra agitation and they communicate with IPOB as the responsible authority that overseas the affairs of the Biafran people be it Nationally or Internationally.

“IPOB has international contacts and connections not through any worthless Government In Exile but through our established Institutions and Structures .

”So, anybody or group peddling or claiming to have set up Government In Exile has again embarked on a jamboree like those who came before them claiming to have formed a government in Exile at one point in time.

“They simply do not deserve to be given any attention because this is the avenue that the Nigerian government wants us to water down our agitation for total freedom.”

Powerful added that, “We are not unaware that some dissidents expelled from IPOB including a former Deputy to our Leader had once suggested this Government In Exile to our Leader, Mazi Nnamdi Kanu, but he did not buy into it knowing fully how needless it is at this stage of our struggle.

“But unfortunately, now that our Leader is in detention, these same elements saw it as an opportunity to actualise their selfish ambition by quickly claiming to have set up the non-existent GIE. We know that their ultimate aim is to use it to sell the Biafra struggle to our enemies but they have failed woefully.

He therefore, urged everybody to ignore and disregard the purported government because the motive is ulterior and sinister.