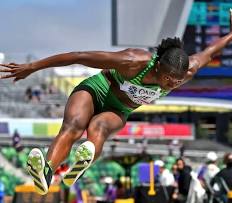 IBADAN, Nigeria (VOICE Of NAIJA)- Ese Brume has won Gold in the long jump event of the Commonwealth Games after leaping 7.00m on Sunday.

Brume had a no jump on her first attempt but bounced back right away to jump 6.99m to take the lead in the final and set a new Games Record.

She added another 6.99m and 6.96m in her subsequent jumps but none of her opponents could match or surpass her thereby securing gold with a jump to spare.

However, on her very last attempt, Brume jumped seven meters for another Games Record to become the first woman to jump that far in the history of the Commonwealth Games.

Recall Ese Brume and Ruth Usoro had sealed a place in the final of the Long Jump event at the 2022 Commonwealth Games.

Brume hit the automatic qualification mark, leaping a distance of 6.81m (+0.3) on her second attempt.

Usoro also booked her spot in the final, jumping a mark of 6.59m to finish joint 7th overall.

In 2014, Brume made big headlines in Glasgow, Scotland, where she won the Commonwealth Games gold medal, her first major competition at the senior level.

But in 2018, she was denied the opportunity of defending her title at the Gold Coast, Australia, after the former board of the Athletics Federation of Nigeria (AFN), left her out of the list of 28 athletes for the Games.