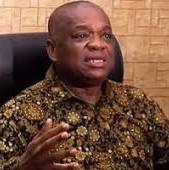 ENUGU, Nigeria (VOICE OF NAIJA)- A socio-political group under the auspices of Abia North Peace Foundation (ANPF), has criticized Ikechi Emenike, the factional governorship candidate of the All Progressives Congress (APC) in Abia State for accusing the Chief Whip of the Senate, Dr Orji Uzor Kalu, of anti-party activities.

In reaction, the ANPF described the claim as not only untrue but also calculated to mislead Nigerians, especially those who live outside Abia who may not be conversant with the realities on the ground.

The group stated this in a statement signed by its President, Chief Nnanna Ukaegbu, and Secretary General, Hon. Ebere Ibekwe.

According to the group, contrary to the claim by Emenike and others, all the issues that reduced APC’s popularity in Abia were caused by him and his group.

“It was people like Orji Kalu, Ogah and elected members that made APC a popular party in Abia through the number of projects they attracted. But Emenike connived with PDP members who hailed him as the man with the 5-G network to destabilise the party.”

The group noted also that as much as Senator Orji Uzor Kalu and Mr. Mascot Uzor Kalu are brothers, their political lives and destinies are not tied to each other.

“Dr Orji Uzor Kalu has his political dreams to pursue as much as Mascot has his to pursue, and the decision on the platform on which to pursue such dreams remains their individual exclusive preserve,” he added.