US Conspiracy Theorist Jones To Pay $45.2mn In Damages For Spreading Fake News 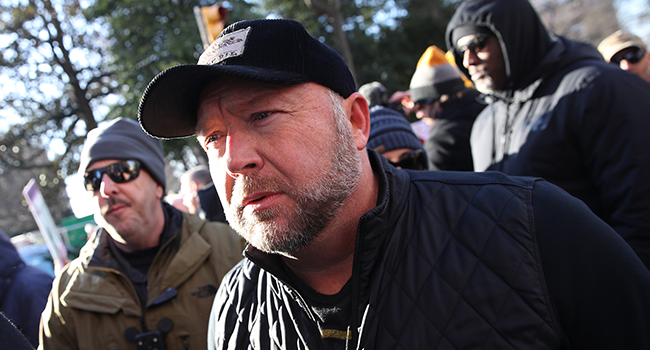 A Texas jury ordered US conspiracy theorist Alex Jones to pay $45.2 million in punitive damages for falsely claiming the 2012 Sandy Hook elementary shooting was a “hoax.”

The verdict came a day after the same jury awarded a couple whose child died at Sandy Hook $4.1 million in compensatory damages for the emotional stress caused by Jones broadcasting falsehoods for years on his InfoWars online and radio talk shows.

The huge sum ordered from Jones, who for years gathered a sizable following for his often outlandish conspiracy claims, vindicated the lawsuits against him by families of some of the 20 schoolchildren and six adults killed by a 20-year-old man in one of the country’s deadliest school shootings.

The $49.3 million total judgement was far less than the $150 million sought by the plaintiffs in the Texas case, Neil Heslin and Scarlett Lewis, whose six-year-old son Jesse was killed.

Still, Lewis said that Jones had been “held accountable.”

“Today the jury proved that most of America is ready to choose love over fear and I’ll be forever grateful to them,” Lewis tweeted.

Jones, a vocal supporter of former president Donald Trump, claimed for years on InfoWars that the shooting in Newtown, Connecticut, was “staged” by gun control activists.

He has since acknowledged it was “100 percent real,” but the Sandy Hook families maintained that his denialism, coupled with his ability to influence the beliefs of thousands of followers, caused real emotional trauma.

He was also accused of pulling in massive profits from harmful lies and disinformation.

The judgement is not likely the end of legal woes for the 48-year-old Jones, who is also facing another defamation suit in Connecticut.

He has been found liable in multiple defamation cases brought by parents of the Sandy Hook victims, and the Texas case was the first to reach the damages phase.

He is also under scrutiny for his participation in the January 6, 2021, assault on the US Capitol by Trump supporters.

During the hearing ahead of the decision Friday, Wesley Ball, attorney for the parents who brought the case, urged the jury to take a stand against misinformation.

“You have the ability to send a message for everyone in this country and perhaps this world to hear,” he said.

“And that is stop Alex Jones. Stop the monetization of misinformation and lies,” he added.

The $45.2 million was close to the maximum allowed in relation to the original compensatory damages.

Randi Weingarten, president of the American Federation of Teachers union, which represented the staff at Sandy Hook, praised Friday’s verdict.

“Nothing will ever fix the pain of losing a child, or of watching that tragedy denied for political reasons,” she tweeted. “But I’m glad the parents of Sandy Hook have gotten some justice.”