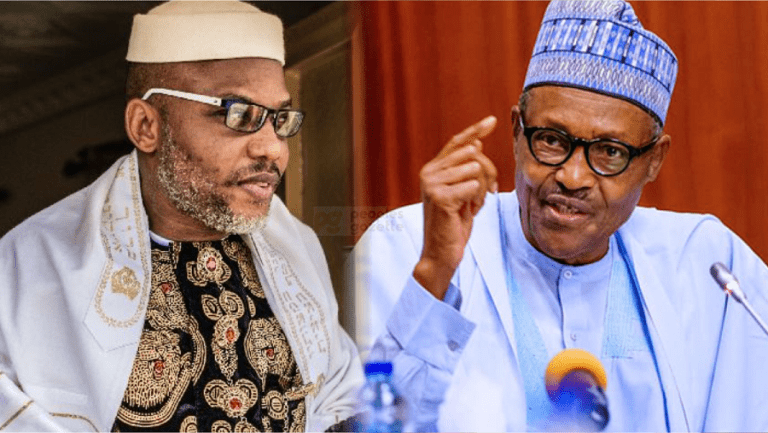 LAGOS Nigeria (VOICE OF NAIJA) – Pan-Igbo socio-political pressure group, the South East Revival Group (SERG) has called on the Federal Government of Nigeria to immediately comply with the resolutions of the United Nations, UN Human Rights Council Working Group on Arbitrary Detention, on the detained leader of the Indigenous People of Biafra (IPOB), Mazi Nnamdi Kanu to avert a fresh war front amid the current insecurity in most parts of the country.

The UN had recently indicted both Nigerian and Kenyan Governments for the extraordinary rendition, torture and continued detention of the IPOB leader without due process.

Consequently, the UN resolved and recommended to the Federal Government to immediately release Kanu unconditionally.

In a statement signed by the President and National Coordinator of the SERG, Chief Willy Ezugwu, the group urged the Federal Government to be responsible and reasonable in handling the recommendations of the UN as part of the bitter pills Nigeria must take to reduce armed struggle in the country.

“For the United Nations to ask the federal government to pay adequate compensation for the arbitrary violation of the fundamental human rights of Nnamdi Kanu, it then becomes clear that the world body has found grave infractions in the process of rendition and detention of the IPOB leader.

“The President Muhammadu Buhari administration must be proactive enough to immediately free Mazi Nnamdi Kanu and open a channel for addressing the root causes of the renewed Biafran agitations in the South East in the general interest of peace, security and national integration.

“The Federal Government must learn lessons from the unfortunate but avoidable insurgency in the North East, which has spread to other parts of the country, and escalated as a result of the arbitrary killing of the Boko Haram founder, Mohammed Yusuf.

“The Peoples Democratic Party (PDP) government, rather than arresting and prosecuting the extrajudicial killers of Yusuf and opening a window for dialogue to address the remote causes of their uprising, ignored the group until it grew into a monster terrorising most parts of the country from 2009 to date.

“The sense of injustice on the part of the followers of Mohammed Yusuf was the singular cause of the now widespread insurgency in the North East of Nigeria, consuming a reasonable chunk of the country’s national budget with attendant loss of lives and property. Such security miscalculations should and must be avoided in all parts of the country.

“We therefore call on President Muhammadu Buhari to immediately order the unconditional release of Mazi Nnamdi Kanu and open a channel for dialogue with aggrieved citizens, not only in the South East but across the country, in order to find lasting peace in the country.

“This has become expedient as the Nigerian security forces will eventually be overwhelmed if avoidable war fronts are opened in all parts of the country, which will be inimical to national peace and development,” the SERG said.

Damilare is a renown content creator, having worked with some of Nigeria's biggest news organizations like PM News/The NEWS, Legit.ng, among others. He has a huge flair for writing and is also very inquisitive. He is more popular for his videos which are an internet sensation.