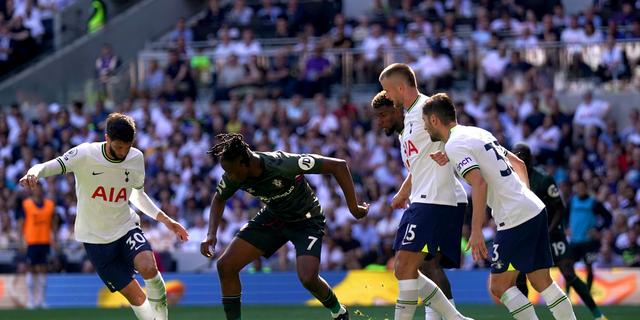 IBADAN, Nigeria (VOICE OF NAIJA)- Super Eagles midfielder, Joe Aribo endured a frustrating Premier League debut for his new club Southampton as they were beaten 4-1 by Tottenham Hotspur in London on Saturday .

The former Rangers had little influence in the 90 minutes he was on the pitch.

He provided no assists and managed only one shot which came in the 73rd minute when he drew a good save from Tottenham goalkeeper Hugo Lloris after being put through on goal.

Southampton coach, Ralph Hasenhuttl sought to have him influence the game with goals and assists in his 5-3-2 formation but Aribo was a largely frustrated figure as he remained isolated up front with his new club struggling to bypass Spurs’ two-man midfield and back three.

The Nigerian won only one tackle, two aerial duels and dribbled past his opponents once with his 76 per cent pass completing rate among the lowest in the game.

Aribo, who joined Southampton for £10 million after three years with Rangers, also struggled to hold onto the ball as he was disposessed three times.

Meanwhile, Aribo’s team-mate and Ghana defender Mohammed Salisu also had a game to forget as he was not only part of a backline that conceded four but also scored an own goal.

With Spurs leading 2-1, they launched a counterattack involving Son Heung-Min and the lively Dejan Kulusevski on the hour mark.

The ball found Emerson Royal whose cross beat the goalkeeper but as Salisu attempted to block it, he sent it inside the left post of his own goal.

Salisu, who confirmed his availability for Black Stars duty last month, was also at fault for Southampton’s fourth goal three minutes later as he failed to mark Kulusevski at the back-post before he slammed the ball in the back of the net.