Nnamdi Kanu: IPOB To Rally In Liverpool’s Stadium, 2 Other Cities In UK 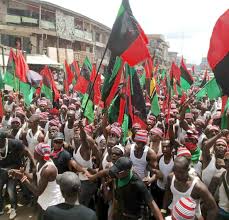 ENUGU, Nigeria (VOICE OF NAIJA)- The Indigenous People of Biafra (IPOB) has disclosed its plan to carry out mega rallies in the United Kingdom cities, to push forward demand for the release of its leader, Nnamdi Kanu in DSS custody.

The group said also that the rallies are targeted towards the actualization of Biafra.

According to the reports being circulated on social media on Friday, the separatist group said it would stage three rallies in three UK cities; Milton Keynes, Leicester and Liverpool on 27 August, 10 September and 16 October, 2022 respectively.

In the report titled “IPOB UK Summer Mega Rallies,’ the group said the October rally will hold at Premier League club, Liverpool’s stadium, Anfield before their match against Manchester City.

This was confirmed by Kanu’s lawyers Ifeanyi Ejiofor and Aloy Ejimakor.

“Rallies like this have escalated across Europe and North America since the extraordinary rendition of Nnamdi Kanu. There was one like this in Brussels a few weeks ago and it drew thousands.

“The frequency of these rallies is a testimony to the determination of a people to the immediate task of releasing Kanu from detention. I think the world has taken notice”, he added.