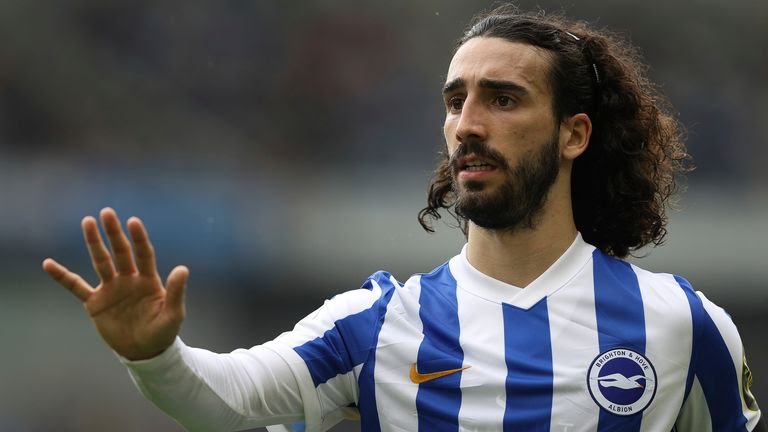 IBADAN, Nigeria (VOICE OF NAIJA)- Chelsea has completed the signing of Marc Cucurella from Brighton in a deal worth £60 million.

He follows the arrivals of Raheem Sterling from Man City (£47.5m), Kalidou Koulibaly from Napoli (£33m), Gabriel Slonina from Chicago Fire (£12m) and Carney Chukwuemeka from Aston Villa (£20m) for a total expenditure of £172m so far.

The 24-year-old, who has agreed to a six-year deal, was registered in time to feature against Everton on Saturday Night Football, live on Sky Sports.

Chelsea took a dig at Brighton when announcing the deal, repeating the format of their Tweet earlier this week denying reports that an agreement had been reached for the defender.

Brighton’s head coach, Graham Potter, said: “We did not want to lose Marc but he wanted the opportunity of playing Champions League football with a view to accelerating his progress to Spain’s World Cup squad.

Of course we are disappointed to see Marc leave, but we wish him well for the future.

He had an excellent first season in the Premier League, deservedly winning both our player of the season awards, and has been an absolute pleasure to work with.”

Cucurella joined Brighton from Getafe last summer and has made one appearance for Spain.

Chelsea’s boss, Thomas Tuchel said one benefit of the signing was to ease the pressure on Ben Chilwell, who suffered a cruciate injury last November.

“It helps in depth and in quality, and it helps with Ben, to escape the pressure of: ‘I have to deliver and we need you absolutely now.’”

“We also have Marcos Alonso and Emerson but Marc is the option in this position and he can play very well in the back three. He has the profile of Azpi (Cesar Azpilicueta) with a left foot. He gives us many options.

“Ben is very ambitious, he couldn’t wait to come back to team training. It seems he needs a bit more time to adapt to the rhythm and physicality of the match itself, which is normal. It’s a demanding league, and we have to take care with him and not throw him in.”

Manchester City tried to sign Cucurella but were unable to meet Brighton’s valuation of the Spain international.

IBADAN, Nigeria (VOICE OF NAIJA)- The Nigeria Governors’ Forum has responded to the Attorney-General of…