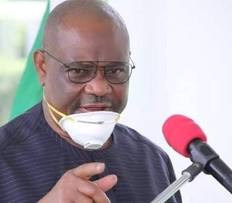 ENUGU, Nigeria (VOICE OF NAIJA)- Governor Nyesom Wike of Rivers state has said although the quantum of civil construction work undertaken by his administration in developing the state may be cost intensive, he won’t stop the state projects.

Wike stated this while inspecting some ongoing projects in Obio/Akpor and Port Harcourt local government areas.

Governor Wike explained that the inspection became necessary to ascertain the impact they would have on the socio-economic life of residents within the areas.

Projects inspected included the 11th flyover site at Location Junction along Mgbuoba-NTA Road, the site for the 12th flyover at Rumuokwuta roundabout, the dualisation of Azikiwe Street -Illoabuchi road and the sand-filled land in Ogbunuabali town.

“One of the reasons we came is to see the impact of the roads and the flyovers. Of course, when the valuers brought the compensation report, we felt it was too huge. So, we decided to go and see things for ourselves, he said.

“But, when we got there, we understood that a lot of buildings will be impacted and that requires us to compensate the owners of those houses heavily. But, it is worth it in order to give Port Harcourt the facelift required and to transform the landscape of the area,” he said.

The Governor said his administration had paid 80 per cent for the road dualisation to the contractor, Julius Berger Nigeria PLC., despite the attendant cost implication.

“We have been able to fulfil our part to Julius Berger. This place now (Illoabuchi Road), we have paid 80 percent for the dualisation of Azikiwe Street/Ilaobuchi Road as at yesterday.

“By Monday, we want to start paying for the compensation to owners of the buildings so that Julius Berger can start demolishing the affected structures.”

He appealed to the residents in the areas, particularly in Mile 2 Diobu, Port Harcourt, to show understanding and endure the inconvenience they would suffer while the work lasted.