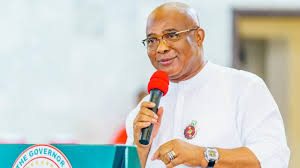 ENUGU, Nigeria (VOICE OF NAIJA)- The immediate past Secretary to the Imo State Government, Uche Onyeagocha, Thursday, asked Governor Hope Uzodinma, to resign since he is incapable of protecting the lives and property of Imolites and foreigners living in the state.

The former Reps member who is now the Peoples Democratic Party (PDP) Candidate for Imo East Senatorial District, stated this in a press release signed by his Special Assistant on Media, MacDonald Enwere.

Recall that residents of Orogwe community in Owerri West Local Government departed their homes after seven people were shot dead by gunmen who invaded the community on Monday night.

Onyeagocha, while condemning the recent killings, said, “Governor Uzodimma should resign since he has shown himself incapable of protecting the lives and property of Imolites and foreigners living in the state.”

The former lawmaker described the sad incident in his local government, Owerri West, as disheartening.

He called on Governor Uzodimma to take urgent steps to restore peace and normalcy in the state.

He said, “This is the irreducible minimum responsibility of any responsible government. The continued shedding of innocent blood in the state under the present administration is condemnable and unacceptable.

“I most heartily commiserate with the people and government of Niger state over the gruesome murder of her citizens in the state and prays to God for the peaceful repose of their souls.”