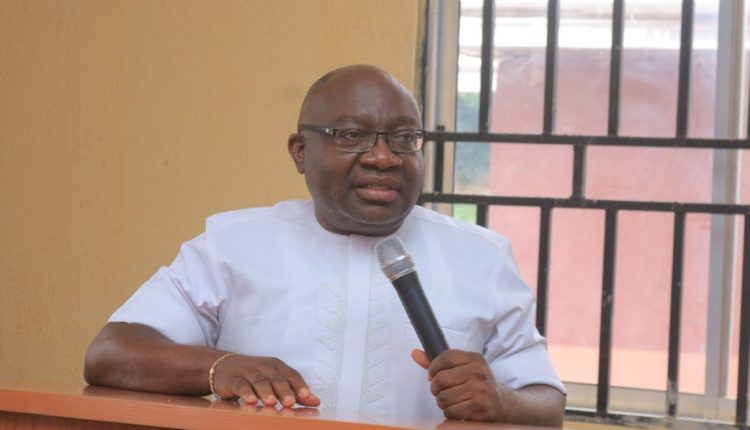 ENUGU, Nigeria (VOICE OF NAIJA)- Professor Greg Ibe, governorship candidate of the All Progressive Grand Alliance (APGA), in Abia State, has jettisoned social media reports that he is being sponsored by Governor Okezie Ikpeazu so as not to probe him (Ikpeazu), if voted into power in 2023.

He described the report as “malicious and mischievous”, and urged members of the public to discountenance it.

Ibe in a statement by his Media Team, said that the report was a propaganda tool by his enemies to blackmail him.

The statement read: “Our attention has been drawn to a humorous and hilarious comic piece authored by an unsuccessful burlesque writer, whose failure to secure a supplementary scriptwriting role in Nollywood has become legendary.

“In this recent laughable piece captioned “How Ikpeazu is funding 3 Abia governorship candidates to retain power by proxy “, this faceless Onitsha market fifth columnist attempted, albeit woefully, to diminish the ascending political profile of Prof Gregory Ibe, the Abia state governorship candidate of All Progressives Grand Alliance (APGA) by erroneously alleging that he is being sponsored by the current Abia state governor, Dr Okezie Ikpeazu.

“Our investigation however, revealed that in publishing this malicious misinformation, the misguided author ingloriously secured the sponsorship of a notorious serial election loser who apparently wants to take his losing streak to a new level by forcing himself into the forthcoming Abia governorship race, albeit through the back door, deploying an unpopular political structure.”

The APGA governorship candidate said he would not be distracted by the antics of his detractors, adding that his major preoccupation is how to take over the reins of power in the state in 2023.

“Being a focused organization whose current engagement is to dislodge the unproductive and malfunctioning PDP administration, the Prof Gregory Ibe Campaign Organization(ProGICO) would have ignored the said publication but for the purpose of putting the records straight and as a way of puncturing the writer’s aim of misinforming, misleading and subsequently deceiving innocent Abians,” he said.

“Prof Gregory Ibe is a globally acclaimed technocrat whose antecedents and footprints in the highly competitive world of corporate business, scholarly erudism, creative innovativeness and proactive patriotism is public knowledge.

“That the allusion by the aforementioned publication that Prof Ibe is being sponsored by the PDP government of Dr Okezie Ikpeazu is not only atrocious, pernicious and mischievous but at best the lowest form of a no-brainer evil conjecture hurriedly packaged, promoted and projected by a league of frightened political dwarfs and Lilliputians in an unsuccessful attempt to freely donate a political godfather to Prof Ibe and subsequently accord credit to Dr Ikpeazu.”