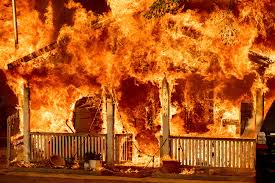 ENUGU, Nigeria (VOICE OF NAIJA)- A students’ hostel, a night club facility and a storey residential building were reportedly razed at different locations and times in Awka, Anambra State.

Although no life was lost in the three incidents, goods worth millions of naira were destroyed during the fire outbreaks, according to The Nation.

The cause of the fire at the hostel and the club was attributed to power surge, while that of the storey building was due to poor management of cooking gas that resulted to gas cylinder explosion.

“Immediately, we deployed our fire truck and Firefighters to the fire scene and fought, controlled and extinguished the fire. A lot was saved during the fire fighting operations.

“The cause the fire was as a result of Power Surge in one of the rooms. There was no loss of life.

“A one storey building with a foam store at the ground floor and a one room apartment on the top floor and shops.

“Cause of fire: Power Surge. Damage: The top floor with its roof and ceiling damaged completely with the household items while some shops on the ground floor were partly burnt.

“In another development, at about 2039hrs (08.39pm) of Wednesday 03-08-2022, Anambra State Fire Service received a distress call of fire outbreak at No. 8 Ken Agummadu Street, Off Ngozika Estate, Awka.

“A storey building with 4no three bedroom flats. Cause of fire: Poor management of cooking gas that caused gas cylinder explosion.

“The right side of the top floor containing a 3-bedroom flat had the household items in the sitting room completely burnt but the building was saved.”