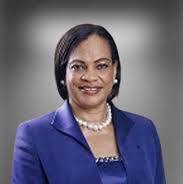 IBADAN, Nigeria (VOICE OF NAIJA)- When you think of a woman who would always defend children against the invasion of the proverbial hungry hawk, Daisy Ehanire Danjuma comes to the mind, most especially for the role she played in the protection of children as the Chairman of ECOWAS Parliament’s Women and Children’s Rights Committee.

The name, Daisy Ehanire Danjuma, is one that will readily ring a bell, especially in high society circles.

Fierce, outspoken, intelligent, and glamorous are words that can be used to describe her without being patronising.

Her looks belie her age, and that is why some people are surprised that she will be clocking 70 years old on Saturday, August 6, 2022.

Daisy Ehanire Danjuma was born on the 6th of August, 1952 in Benin City, Edo State.

She is a law graduate of the Ahmadu Bello University, Zaria with over 4 decades post-call experience having been called to the Nigerian bar in 1977.

Blessed with both beauty and brains, Daisy began her career as a State Counsel in the Lagos State Ministry of Justice (Department of Public Prosecutions) and was a pioneer Legal Counsel to the Legal Aid Council of Nigeria before working for the investment bank Nigerian Acceptances Ltd. (NAL).

She spent the next decade as Company Secretary/Legal Adviser to the Nigerian Television Authority (NTA) before moving into private practice.

In 2003, she was elected as a Senator of the Federal Republic of Nigeria where she served on numerous committees, most notably as Chairman of the ECOWAS Parliament’s Women and Children’s Rights Committee and Senate Committee Chairman on Women Affairs and Youth Development.

She was also a member of other committees, including health, education, finance and land transport.

In 2019, May & Baker Nigeria Plc appointed Daisy Danjuma onto its board of directors.

She is also Trustee of the H I D Awolowo Foundation. She is the Chairman, Board of Trustees of Lagos Public Interest Law Partnership and currently the Executive Vice Chairman of South Atlantic Petroleum Limited.

She is married to a billionaire and former Minister of Defence, Theophilus Danjuma, and they five children. However, Daisy does not have airs around her, and that has endeared her to many.

She is a prominent part of her husband’s TY Danjuma Foundation, which has positively impacted the lives of many over the years.

Among other things, the foundation provides free eye care services as part of its initiative , ‘Vision for a Brighter Future’.

It also has programmes in the areas of maternal and child health, neglected tropical diseases, and blindness.

In the area of education, they provide support for Universal Basic Education through teacher’s training and empowerment. This is even as they award scholarships to indigent students.

A certified head-turner, Daisy is effortlessly the cynosure of all eyes whenever she attends events.

Impeccable and elegant, yet understated and modest, she doesn’t go out of her way to look beautiful; it comes naturally to her.

Her radiant smile also usually brightens her face like make-up.

Her love for choice jewellery is also second to none, as she is known to go for unique pieces that lighten up whichever outfit she adorns.

Daisy Danjuma used to be a staple at high profile events in the country but in recent years, it seems she has slowed down. These days, she appears to be selective of the events she attends.

However, it is not in doubt that she has continued to age gracefully, as she can easily make much younger ladies green with envy.