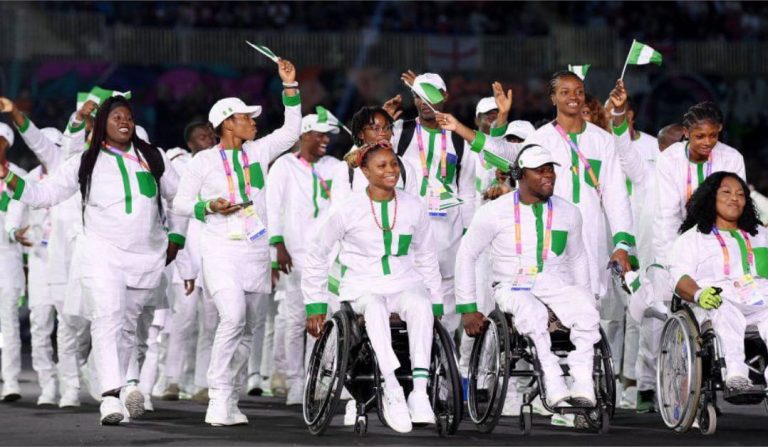 IBADAN, Nigeria (VOICE OF NAIJA)- The six Nigerian athletes who featured in the men’s and women’s 100m track events, on Wednesday, failed to make the podium at the Commonwealth Games in Birmingham.

The men’s 100m was won by Kenya’s Ferdinand Omanlaya while Jamaica’s Elaine Thompson-Herah got the gold medal in the women’s category.

Nigeria was not represented in the men’s finals as the trio of Godson Oghenekevwe, Favour Ashe and Raymond Ekevwo fell short in the semi-finals and failed to reach Wednesday’s final.

Oghenekevwe ran 10.52 seconds in the first of semi-final to finish in ninth place, while Ekevwo ran 10.36 seconds to place seventh in the third semi-final.

Ashe, who had a better time among the trio, fell short by a spot, finishing third place in semi-final two.

Still, Ashe’s time could not get him a qualification among the best losers.

The women’s event witnessed Rosemary Chukwuma and Grace Nwokocha reaching the final, while Joy Udo-Gabriel could not progress after ending in sixth place in the second semi-final.

Meanwhile, Chukwuma ran 11.17 seconds, followed closely by Nwokocha in 11.18 seconds to finish fourth and fifth respectively in the race.

In the men’s high jump event, Mike Edwards finished in sixth place, jumping a height of 2.19 metres which could not secure him a medal.

Athletics events, amongst other sports, continue on Thursday with Nigeria looking to add to the eight medals they have won so far at the Games.