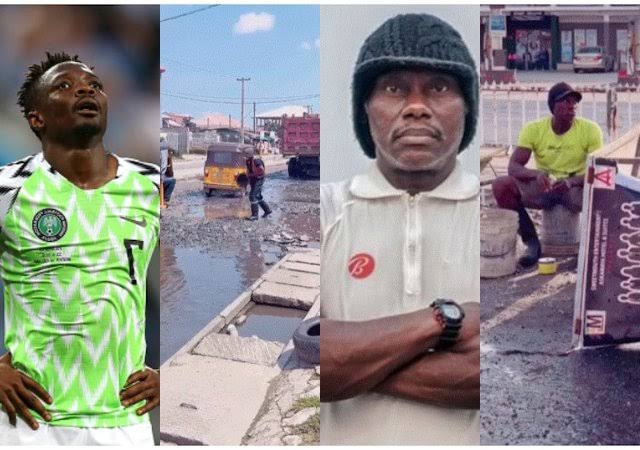 IBADAN, Nigeria (VOICE OF NAIJA)- Super Eagles captain, Ahmed Musa has sent half a million Naira to Nigerian Olympian, Bassey Etim who was spotted around the Ajah area of Lagos, filling up potholes.

A musician, Oc Cares, recently disclosed how he observed Etim nicknamed ‘Iron bar’, at a failed section of the road along the Ado/Badore road in Lagos, prompting him to reach out.

Bassey Etim, won a gold medal at the 1983 Commonwealth Games in Malta.

He stated that he suffered an injury while representing Nigeria at the 1984 Olympic Games.

The 56-year-old, revealed that he had to spend his life savings for his treatment, claiming he was abandoned by Nigeria.

The Cross River state born athlete said: “I sustained an injury, and when I came back, Nigeria refused to take care of my injury, so I had to use my life savings to go back to America in September 1985 to take care of the injury.

“But I still come out to volunteer myself to give back to my country. “People are saying, ‘why should you do that? They didn’t take care of you’.

The post which has since gone viral, attracted Super Eagles captain Ahmed Musa, who requested his contact.

The striker wrote on Instagram: “How can I get to him pls.”

In an update on Thursday August 4, a reporter with Sports Brief , Babajide Orevba revealed Musa had sent the former athlete N500,000.