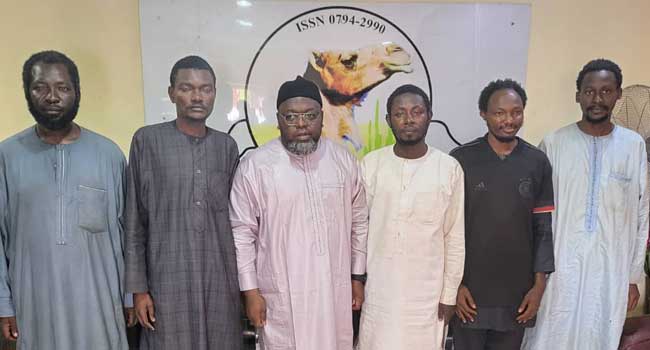 IBADAN, Nigeria (VOICE OF NAIJA)- Mustapha Imam and Mukthar Shu’aibu, two victims of the Kaduna-bound train attack who were released on Tuesday, have spoken about their 127-day ordeal.

The five hostages were among the 62 abducted on 28 March, 2022, aboard an Abuja-Kaduna train.

Imam, a medical doctor said the captives battled with starvation, with no drugs to treat common ailments such as malaria.

He said as the medical doctor in the camp, he treated the captives as well as the terrorists who abducted them.

“In the last four months in the bush there was no food to eat, we were hungry for the last three and half months. When I said hungry, it’s an understatement.

“There are days that we will eat once a day for certain days. Just imagine, some children are one-year-old, some others 20 months, feeding once a day.

“I was the medical doctor in the camp, I treated the captives as well as the Boko Haram members. There was no medication.

“There was a day a lady had a malaria fever and she almost went into a coma because there was no medication for malaria treatment. The situation is terrible.”

He also said that some of the female captives said the terrorists brutalised them in the first two weeks they spent in captivity.

He appealed to the government for urgent intervention to free the other hostages still in captivity.

Another freed hostage Shu’aibu said since the day they were abducted until they were released, they never knew peace.

He narrated how he was shot during a ‘friendly’ exchange of fire between the gunmen.

“While we are (were) 85 days in captivity, one certain Tuesday, after I finished the prayer, I heard a gunshot, after that, I noticed blood running down from my stomach to the leg, the bullet ‘brushed’ me.

“The medical doctor in our camp gave me first aid. Their doctor (bandits’ doctor) came and treated me but he could not find the bullet in me.

“I believe that the bullet is still inside me, we can now search for the bullet through scanning.”

It was however not clear if any money was paid to the terrorists to release their abducted victims.

The terrorists were said to have placed a N100m ransom on each captive.

The terrorists have so far released 37 of the passengers they abducted from the train while about 35 are still believed to be in their custody.

Last week, the terrorists released a viral video where they were seen flogging their hostages.

The presidency, however, accused the terrorists of using propaganda to compel the government to yield to their demands.