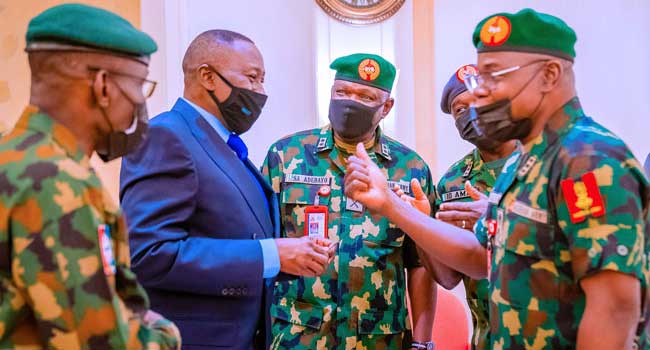 IBADAN, Nigeria (VOICE OF NAIJA)- The Leadership of the Senate, led by Senator Ahmad Lawan, is meeting with the service chiefs over the security crisis in the country.

The bi-partisan closed-door meeting with the Service Chiefs is aimed at reviewing the current security strategies and discuss new solutions.

Speaking at the commencement of the meeting, Senate President Ahmad Lawan said the security challenges have lingered and the Senate had hoped that the situation would have been better.

Lawan said the situation is frightening, adding that there is nowhere to hide or go. He stressed that it is dire at this time to come up with an effective solution, as the crisis is dislocating where the head of government is situated.

Senator Lawan, while noting that security agencies are doing their best, stressed that more can be done.

Responding, the Chief of Defense Staff General Lucky Irabor said a lot is being done to improve security.

General Irabor emphasized that the troops are still committed to the cause, adding that no one is leaving any stone unturned in addressing the problem.

The meeting between the Senate and the Service Chiefs comes few days after members of the National Assembly threatened to impeach President Muhammadu Buhari if he fails to properly tackle the security crisis in the country within six weeks.

In an unexpected move, Senators, mostly those belonging to the opposition parties, staged a walkout following their call to impeach President Muhammadu.

According to them, the laxity with which the security issue is being treated is appalling and as such a steeper measure to correct the anomalies has become imperative.