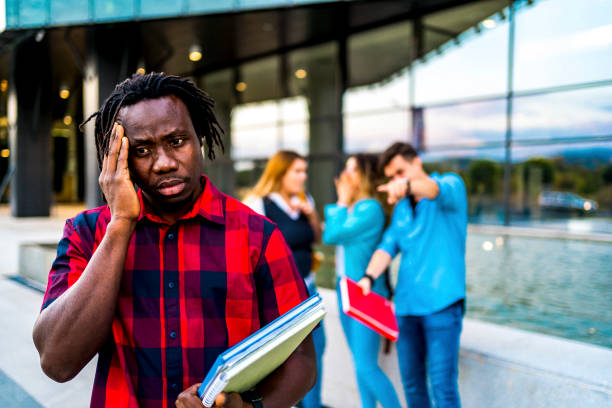 IBADAN, Nigeria (VOICE OF NAIJA)- A political theorist identified as Lukas Slothuus on Twitter, has narrated the racism a Nigerian man experienced in Germany.

@islothuus tweeted: “Racism in Europe is so terrifying. Was chatting to a Nigerian guy living in Germany on the train the other day. He said one day during a storm a tree on his street fell down and blocked the pavement. He decided to pick it up and move it out of the way so people could pass.

“He then spotted an elderly white woman looking out through a window in her flat. She was shaking her head. After he’s done clearing the pavement of tree debris he’s ready to go home. Next thing he knows, German police arrive saying they’ve had reports of a suspicious looking man.

“The principal of his son’s school called him in because his son was ‘unruly’. ‘He’s five years old and I am raising him to stick up for himself and be proud’ he said. Otherwise he will get bullied forever. His son is the only black kid in the school.

“He said ‘sometimes the racism is so bad that I know I have to pack my bags and go back to Nigeria. I’ll forever be a black man in a white country that doesn’t want me’.

“At work he has to stop himself from going over to a corner and start crying after yet another racist incident.

“He has a university degree from Nigeria, he is a native speaker of English and French, and learnt German, Spanish, Italian from working all over Europe.

“He then showed me his scars from acid burns all over his arms from his dangerous manual job in Germany.

“When we’re bombarded with claims of ‘woke nonsense’ every day it’s useful to remember the stories of actual people who have to endure the reality of racism that the media and right-wing politicians pretend is made up by radical academics. Yet it’s their denial that’s made up!”

Another tweep, Remco Dierickx weighed in on racism in Europe and said: “Listen I was a foreigner in Germany as well! It sucks if you don’t speak proper German the lady at the butcher or bakery won’t even look at you. After 10 minutes she will just start jelling to leave her shop.”

@cjokay said: ““He has a degree. He speaks different different languages.”
All of this is irrelevant.
He should be treated decently because he’s a human being, not because he has what are considered to be “acceptable” abilities and accomplishments.”

@purple_wooper: “Acid burns from a job in Germany? I call that bullshit, as a German. Either the work was not legally registered and thus not following laws or he had gloves. Work protection and security are taken extremely seriously in Germany. Accidents happen , but they are accidents.”

@o2bolaji also shared similar experiences in Germany. The tweep wrote: “Yep, met another black man living in Germany on my flight when I was leaving there, he told me that he’s worked there for 12 years and coworkers still don’t speak to him. He said he says hello in the mornings and no one responds, no one speaks to him it’s very isolating.

“I also had horrible experiences in Germany, weren’t allowed in clubs because I’m black, the clubs that did allow me in, Germans would make monkey noises at me sooo it was very interesting:”

Replying to @o2bolaji and @islothuus, @chrissythebull said: ” My father said when he was stationed in Germany many years ago the natives asked him why his tail wasn’t out. They thought black men had tails that came out at night.”

@fourwildones shared a Mexican friend’s ordeal while living in Japan for 3 years.

“Said it was the loneliest 3 years of his life.
Every time he walked into a bar or restaurant, the place would go silent. Then people would start making “Speedy Gonzales” noises at him.
Racism is a worldwide phenomenon, sadly.”