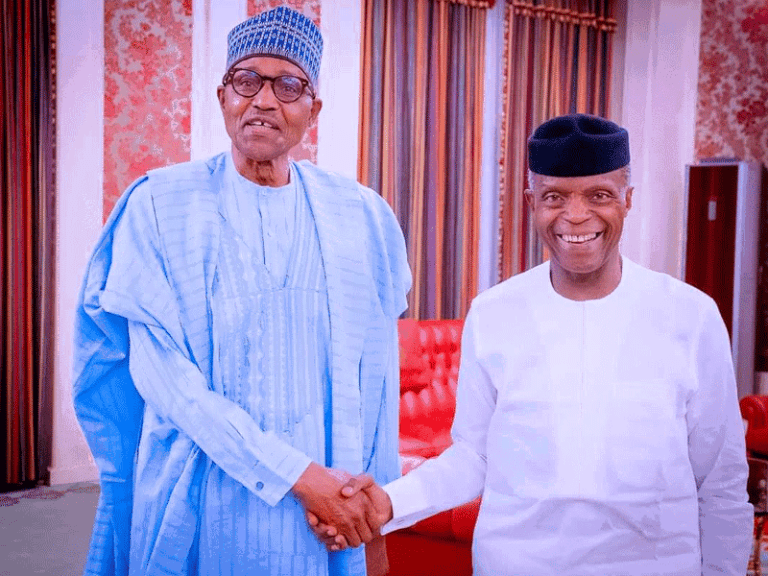 ENUGU, Nigeria (VOICE OF NAIJA)- The apex Igbo socio-cultural organization, Ohanaeze Ndigbo Worldwide, has called on the National Assembly to impeach Vice-President Yemi Osinbajo alongside President Muhammadu Buhari, saying that they are both failures.

According to the Ohanaeze group, both Buhari and Osinbajo failed in their primary responsibility of protecting Nigerians, so they should leave together.

The group’s Secretary, Okechukwu Isiguzoro, in a statement on Tuesday, insisted that National Assembly’s move to serve President Buhari an impeachment notice should not exclude the Vice President.

The group expressed fear that if Buhari is impeached and Osinbajo takes over as Acting President, the presidential candidate of the ruling All Progressives Congress (APC), Bola Tinubu will have an advantage.

Voiceofnaija.ng had reported that Senators threatened to serve an impeachment notice on Buhari over his inability to tackle insecurity in Nigeria.

“The exemption of the Vice President, from the impeachment threats, shows that APC Presidential candidate, Bola Ahmed Tinubu stands to be a major beneficiary.

“Ndigbo reminds the National Assembly that attempts to initiate the impeachment process against President Buhari without Vice President Osibanjo are an incomplete process and will create windows and loopholes for the Vice President to play an ethnic card for the West.

“Irrespective of running against Tinubu in the APC primaries, he will use the power of incumbency in favour of Bola Tinubu’s victory which is a contradiction with the body language of the Mr. President, who is likely reluctant to influence the 2023 elections for anyone but whoever Nigerians want at the polls.

“If Buhari should be impeached, then Osibanjo must go with him, both of them should be blamed for the rising insecurity challenges in the country.