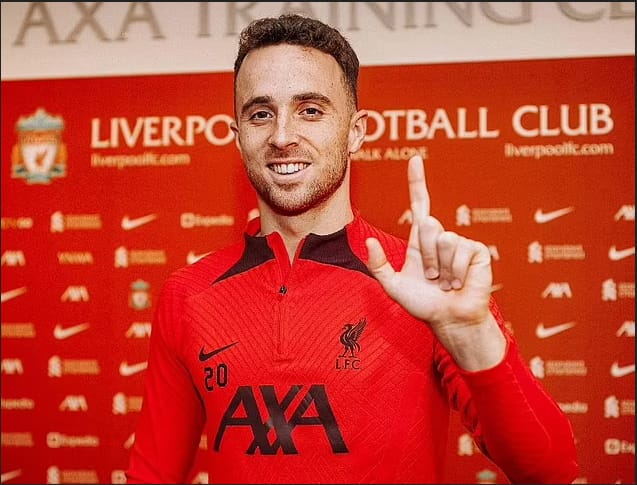 IBADAN, Nigeria (VOICE OF NAIJA)- Diogo Jota has signed a long-term contract extension with Liverpool that will run until 2027.

Jota joins fellow Liverpool forward Mohamed Salah in signing a new deal with the club this summer, following the departure of Sadio Mane to Bayern Munich.

The 25-year-old netted 21 times in all competitions for the Reds last season, but he will face stiff competition for a place this term following the arrival of Darwin Nunez from Benfica.

“Well, [I’m] really proud, I have to say,” Jota told Liverpoolfc.com after signing his new contract.

“Obviously since I arrived two years ago I established myself as an important player in this team – that’s what I wanted from the beginning.

“Now, signing a new long-term deal, it’s obviously from the club’s perspective proof of the belief in myself as a player. For me, obviously it’s really good to establish I’ll be here for a while.”

Jota has not featured in Liverpool’s pre-season matches, and Saturday’s Community Shield win over Manchester City, after suffering a hamstring injury on international duty for Portugal in June.

He confirmed that the issue is set to keep him out for a “few more weeks”, almost certainly ruling him out of Saturday’s Premier League opener at newly-promoted Fulham and the following matchday’s clash with Crystal Palace at Anfield.

“Unfortunately for me I had an upset in this pre-season because I got injured [in the] last game of the season playing with Portugal,” Jota added. “So I was coming back in this pre-season, I felt it a little bit again. So it will be a few more weeks, I would say.”

Jota, who has scored 34 goals in 85 appearances since joining Liverpool from Wolves, is expected to miss out on Saturday’s Premier League opener on Saturday at newly-promoted Fulham.